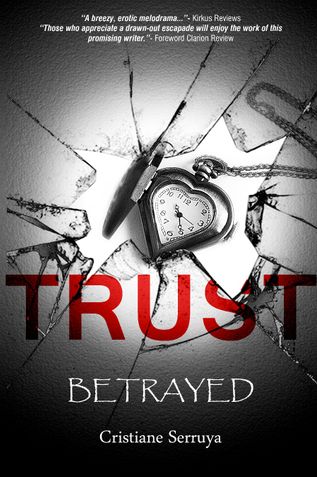 BETRAYED, the second installment of the TRUST trilogy, journeys back into the past to reveal the secrets and dark deeds of Sophia, Ethan and Alistair.

Sophia, the ravishing owner of Leibowitz Oil, is determined to have a relationship with Alistair, but a dark and terrible secret lurks beneath the surface she presents to the world. Will she be able to find peace within herself?

Ethan, a steel tycoon, no less haunted by his secrets and lies, is still in love with Sophia after their short lived relationship. He now lives in an alternate reality he has created, because the loss of Sophia is too unbearable to face. He will pay any price to have her. Will he have her back in his arms or will he master his loss and move on?

Sophia, Ethan and Alistair will need to overcome their guilt, fear and pain and learn to see themselves through forgiving eyes to find love. Will they succeed?
Or will they succumb to their misery?

Cristiane Serruya lives in Rio de Janeiro, Brazil, with her husband and two daughters. She majored in Fine Arts and Law, and has been working as a lawyer since 1991. She is widely travelled, having lived and studied in England, Switzerland, Italy and France. - See more at: http://pothi.com/pothi/book/ebook-cristiane-serruya-trust-new-beginning#sthash.wjrNRcEa.dpuf

Be the first one to write a review for the book Trust: Betrayed.