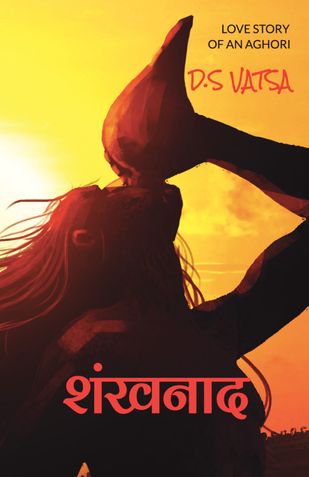 Love story of an Aghori

1992, The year that changed India as we knew it. People were killing and getting killed in the name of religion. But this was not the only conflict in the name of faith that year. Away from world’s attention another cold war was on the brink of turning hot. This was happening in another holy city - PRAYAG… the land of confluence of Ganga, Yamuna and Saraswat.
Prayag was engulfed in a violent tussle between two sects of Hinduism. Between the city’s powerful priestly class and the ascetic Aghoris. This battle of hegemony over the Sangam Ghat had left many casualties.
Bhairav, a coffin child, is brought up in the severe ascetic tradition of Aghoris, in the cremation ground area of Prayag. Bhairav grows up to into a great devotee of Shiva and Kali. Bhairav’s coreligionists think of him as the successor of the sect’s head.
On the other side of the city, Chief Priest’s daughter Shashi is a vivacious girl who likes to live life to its fullest. But her life turns upside-down when she falls for ascetic Bhairav… who is on a love long vow of celibacy.

Shashi’s passionate love for Bhairav does the “Sankhanaad”
for a conflict that ends up engulfing the whole city in its flames.

D.S. Vatsa (born 1986) is a Filmmaker/Story teller. He was born in Allahabad (now Prayagraj) but shifted to Mumbai with his family as a kid. As son of a poet and a great painter he underwent his initial schooling in culture of Mumbai.

Soon, fate called him back to his roots when he went back to do his education from Allahabad & Lucknow. In Allahabad, As a brilliant student he got to experience the rhythm of this beautiful city that is a cultural melting pot symbolising India.

At the age of 16, he left his studies and came back to Mumbai alone, where in search of shelter and food, he started doing odd jobs in the field of movie editing in the film Industry. One thing led to other, and he went on to edit many movies and TV shows. In 2013 he was nominated in category of best editor for ITA awards. He is known for movie trailers of big films.

In 2015 he started shooting his first short film "I Witness". As a director he won Best Director award at MISFFI miami. Film also won 17 awards in national and international category.

In these years he was also head of VFX company with his experience of post production and technical skills.

In 2017 He shot his first feature film "Shoonya-Sound of Silence" written by him which is a silent film from perspective of a deaf and mute man. "Shoonya" is in Film festivals and has been acclaimed by the experts. After taking a six-month sabbatical from his media works, he went back to Allahabad & Benaras where he researched extensively on the cult of Aghoris. "Shankhnaad" is his debut novel.

Be the first one to write a review for the book Shankhnaad.

Other Books in Romance, Religion & Spirituality

In The Line of Beauty
Vikash Agarwal