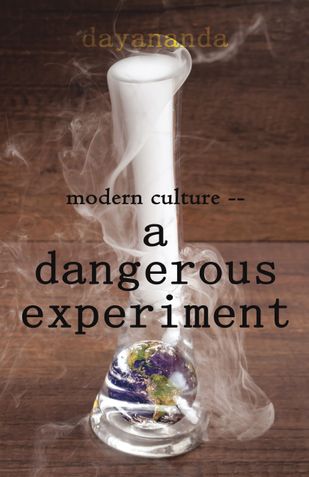 Modern culture is an experiment because it has not proven itself to be compatible with nature. It has not demonstrated that it can sustain itself.

It is an experiment because, for tens of thousands of years, societies were not so focused on technology, so tolerant of rampant greed, so indifferent to religions and other social systems that control greed, and so interested in elevating all people to the level of kings and queens of their domains.

It is an experiment because humanity has never successfully combined all those factors, especially on such a large scale.

In 1967, Michael was initiated by A.C. Bhaktivedanta Prabhupada, the founder of the worldwide Hare Krishna movement, and given the name Dayananda.
For 20 years, he held management positions in Prabhupada’s organization in Los Angeles, London, Dallas, Tehran, Riyadh, Washington DC, and New York.
In India for three years, he studied Vaishnava culture, Sanskrit, Hindi, and Bengali under the guidance of Professor Ramakanta Chakravarti, Anantaram Sastri, Professor Tulsiram, and others.
Spending three years in Iran, he became fluent in Persian. There and for two years in Saudi Arabia he studied Islam, Sufism, and Zoroastrianism.
Since 2006, he has been researching, writing, and lecturing on the notion that essential aspects of Vaishnava culture can provide solutions to environmental problems.
He also worked for 25 years as an IT (Information Technology) consultant, retiring in 2005.
He’s the author of Prahlad (a novel), War of the Soul I & II (commentary on the Bhagavad Gita), Sankirtana As It Is, Bhagavad Gita (translation), Greed, the Gods, and the Environment, and Modern Culture—A Dangerous Experiment.

Be the first one to write a review for the book Modern Culture--A Dangerous Experiment.

Nutrition to plant comes from space and not ...
Dr Naresh Kumar Gupta

Nutrition to plant comes from space and not ...
Dr Naresh Kumar Gupta