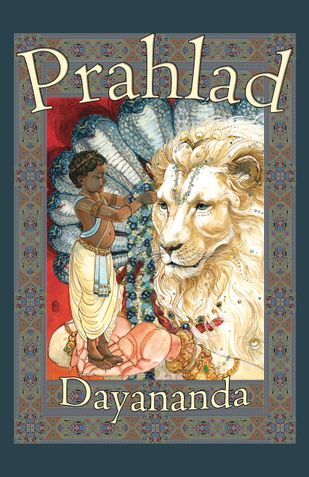 Prahlad, hero of this age-old story, is a five-year-old boy persecuted by his father, Kashipu. The ungodly Kashipu conquers the gods of the universe, and he inhabits their celestial realm. Then he discovers that his own son, Prahlad, is a devotee of the God of the gods, Vishnu, who is Kashipu’s sworn enemy.

Dayananda narrates this version in the style of a modern novel, yet he is faithful to the story in the Bhagavat Purana and the Mahabharata.

Three hundred million Vaishnavas know the story well, and, indeed, hundreds of millions more appreciate its message. Prahlad has been the theme of at least ten movies in several languages over the last 90 years.

In 1967, A.C. Bhaktivedanta Prabhupad, the founder of the worldwide Hare Krishna movement, accepted Dayananda as his disciple.

He served as a leader and administrator in Prabhupad’s organization for nearly 40 years.

He has studied Sanskrit, Hindi, Bengali, Farsi, and Spanish as well as the history and philosophy of Vaishnavism.

In addition to his volunteer services in Prabhupad’s organization, he worked for 25 years as a professional in the field of information technology.

Now retired, he spends most of his time writing books, traveling, and lecturing.

Be the first one to write a review for the book Prahlad.