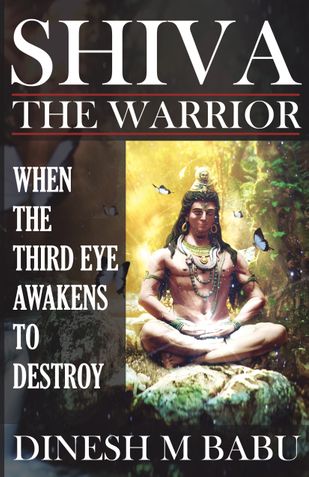 When The Third Eye Awakens To Destroy

The Gods lived behind a veil that shielded the ether world they lived in from the gross world. Lords Shiva and Krishna lived behind the veil, with Shiva meditating most of the times.

Shiva was awakened from his trance(samadhi), as he felt something missing in him, causing an unrest in him during his trance. Was it his beloved wife Parvathi getting estranged from him or was it the rise of adharma (injustice) in the physical world due to his inactions and meditative trance that lasted multiple eons.

As Shiva embarked on a journey to find Parvathi’s whereabouts, he was confronted by Himsakama (Violent-Lust) who was the cause of some of the most burning problems of the modern world.

Will Shiva annihilate him? If so, how? After he has lost his Shakthi (Power) i.e. Parvathi, it’s going to get difficult for Shiva? Will Shiva succeed in destroying the Asura? And will he reconcile and reunite with Parvathi?

Find out hidden meanings, subtexts, metaphors and a slice of the Hindu wisdom through this modern fictional mythological tale.

Dinesh M Babu is a spiritual sadhaka, author, writer, journalist, entrepreneur and investor who took to Tantra to explore and experience the profound spiritual wisdom inherent in Hindu mythology. He takes a keen interest in sharing the Hindu wisdom with the rest of the world through real and fictional mythological tales of Hindu Gods & Deities.

Be the first one to write a review for the book SHIVA The Warrior.

Sword of the Gods: The Chosen One
Anna Erishkigal