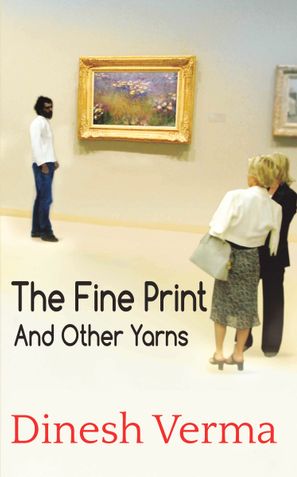 The Fine Print and Other Yarns

“Parisian adventures: Stories that skirt around the bothersome issues of crossing cultures.” (Literary Review, The Hindu)

“A kaleidoscope, each turn of which presents an eminently interesting and unforgettable character.” (The Sunday Tribune; Spectrum)

“The stories provide a keen insight into the mind of an average Indian abroad, his resilience and adaptability.” (Asian Age)

The Fine Print and other Yarns is a collection of nine stories some of which may well be classified as novella as they run into thirty to fifty pages. The first four stories are set in Paris of 1980s and the next three in Paris of 1990s. The last two are set in India around the turn of the last century. Each of the stories portrays a memorable character:

Buddy, who has a strange fascination for Impressionist painters, gets a rare opportunity to visit Paris, though only for two days. What he thinks would be a rare opportunity to experience firsthand the life of painters and artists in Paris does not quite correspond to the image of Impressionist painters that he has been carrying in his mind. What follows is like an exorcism that rid him of his quaint notions.

Krish, studying at a reputed Business School in Paris has an ambition to become a marketing guru. He is invited for dinner to an elegant, high-end restaurant in a chic quartier of Paris by a colleague on her birthday. The dinner in that posh restaurant proves to be a lesson in marketing skills for Krishnan, though one that he has to learn the hard way.

Dr Chopra, who considers himself to be the last word on foreign travel, is on his first visit to Paris. Not knowing a word of French, the jet setting doctor finds himself driven to the point of utter hopelessness and despair merely finding his way to his hotel from the airport. Feeling like a child who has been separated from parents in a big fair, he thinks of taking a flight back to Delhi the same day. Yet in two days he gets so fascinated with the city of fashion and romance that he is already planning his next trip there.

Pieter Van Der Polder, a Dutch young man who cooks his dinner with a finesse and attention to details that would remind one of a classical music performer, gets into a really interesting battle of wits with a Belgian girl on his floor.

Amitabh, a young man who is in Paris for a year with merely five hundred dollars that the foreign exchange rules allow him to carry out of India and a meager living allowance, finds his long standing reputation of being a generous and hospitable person getting evaporated into thin air. He undergoes such a transformation within a few days of his arrival in Paris that he would put to shame a confirmed miser.

A young mobile phone dealer in Delhi, who became multimillionaire almost overnight selling mobile phones, soon after the introduction of mobile telephony in Indian markets and then reduced to penury due to a sudden reversal of his fortunes, is once again on an upward trajectory in his business. Travelling from New Delhi to Chennai by train, he relates in a very brash and candid manner the tale of his shady business deals to his fellow passengers, not knowing that there is a dangerous person amongst his audience.

Bawa, a corporate executive in New Delhi buys a new Indian car in late 1980s, which is based on the technology of 1950s. Almost in love with his car he finds it getting transformed into virtually an antique after the influx of a host of new generation Japanese and German cars in the Indian market in early 1990s.

These stories provide a rare insight into the psyche of an average Indian and his resilience and adaptability, which are the hallmark of the Indian Diaspora.

Dinesh Verma was born in Delhi and completed his Masters in English Literature from University of Delhi and thereafter worked with the Indian Revenue Service. He is also an alumnus of Institut International d’Administrations Publique and the Ecole Nationale des Ponts et Chaussées, Paris, and has also attended courses at Syracuse University, New York and at Harvard Business School. Presently he works as a Consultant at New Delhi.

The Fine Print and other Yarns is his first collection of stories about life of expatriate Indians in Paris. He has translated a number of famous stories of Munshi Premchand which have been published as a collection, The Divine Arbiter and Other Stories. He has also written a novel The Parisian Interlude which is presently at the stage of copy editing. He is presently working on a short novel about the first visit of a child, growing up in an anonymous and impersonal suburb of Delhi, to his parental village.

The Fine Print and Other Yarns

Be the first one to write a review for the book The Fine Print and Other Yarns.