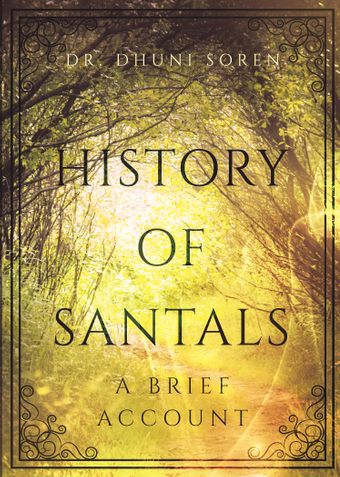 The history of Santals has been preserved and passed on over the generations by the words of mouth until the Europeans took interest in them and started writing about them. Most of the initial writings were done by hearing from the elders of Santals and translating them. Some Indian writers had written about them as well but only by hearing from others. All of them had their own perspective as they felt appropriate.

I have been looking for an authentic book about Santals written by Santals themselves who were born and brought up with them in their villages and hamlets for a long time but was unable to find one.

So I decided to write myself after doing some reading of materials written by different people mainly Europeans and some Indian authors.
My little book is no different except I am a Santal myself, born and brought up in a santal village and learnt about our belief of creation, customs, traditions, culture, and legends passed on orally by the elders of the villages to the younger generations during regular worship at the various festivals and other special occasions.

They are basically a repetition of the same starting from the creation of the earth to the birth of human beings, growing up, marriage, procreation and death and migration. I have lived through them and have managed to come out of this darkness according to Dr W.G Archert I.C.S one of the last deputy Commissioners of Dumka towards the fag end of British Raj and author of many books on Santals including Tribal Law and Justice and managed to reach United Kingdom several years ago.

So I have tried to put our history into perspective from my life long experience and readings of different books and hope you find this helpful to understand the real history of Santals.

Dr. Dhuni Soren was born 12 years before India became independent in
1947 in a Santal village, Boarijor in the old sub-division of Godda in united Bihar, India. His father was a Manjhi of the village (Head man) and Pargana of the area. He had police, magistrate and revenue powers during the British Raj. But there was no infrastructure, transport. electricity and only a few primary schools and only one middle school in the area. There were only three secondary schools in the whole of the district of greater Santal Pargana and not even a single college.

Dr Soren did his schooling in different village schools and had no idea about his future until he reached Zila School in the 10th class in the district headquarter of Dumka. His mind and eyes opened up there. He decided to become a doctor to be able to write few letters in front and after his name like that of a Civil Surgeon who used to visit Zila School regularly along with other top officials of the district like Deputy Commissioner and Superintendent of Police.

He also decided to go to the top most colleges of the state which were in the capital city of Patna. He was delighted to secure a place in Patna Science College but with Mathematics and not Biology which was essential to do medicine. He waited for six months with the hope of switching to biology. But it did not happen as other pupils also wanted to do the same and they had better marks.

He returned home and did cultivation for a year and started a post office in the village and worked as its post master with a paltry sum of Rupees Twenty a month. After a year he returned to Science College and completed his Intermediate of Science with Biology by joining the evening classes.

He then competed for a place in the Patna Medical College Hospital, then known as Prince of Wales Medical College, the oldest in Bihar and one of the few Medical colleges of India. While there he won a scholarship of government of India to learn flying and qualified as a pilot from Patna Flying Club while doing medicine.. Apart from this he was a student and social activist for the welfare of tribal students in the various colleges of Bihar and beyond, He was for a period General Secretary and President of All India Adivasi Students Fellowship which gave him opportunity to know many tribal students of his generation and political leaders of then Bihar. He was also an active sportsman in the college and was actively involved in organising SARHUL festival in Patna with other fellow students and tribal and non tribal political leaders of South Bihar region.

After completing his medical course, his first posting as a doctor was Civil Assistant Surgeon, at the Sadar Block of Jamtara a sub-divisional town of the district of Santal Pargana. He worked hard there and established himself as a good surgeon. While working there, he came to know from his contacts of student days in Patna that there was a scholarship for higher studies in the Welfare Department for Adivasi doctors in the United Kingdom. He managed to secure that and went to the United Kingdom as a student of the Royal College of Surgeons, London in 1965.
He lives in United Kingdom with his family but still has great love and affection for the people he has left behind and visits them regularly and does some social, cultural, educational and charity work.

He has also attended United Nations working group on Indigenous populations in Geneva in 2004 and 2005 on behalf of World Adivasi Council and spoken about the rights and privileges of Adivasi of India. This forum has since been moved to New York as United Nations Permanent Forum on Indigenous Issues (UNPFII) and would like the new generation of Adibasi to attend.

Dr. Soren has recently started with the help of Er Amit Besra (Co-Founder & CTO) from Kolkatta, India a Social Media forum called Help Santhal! to connect educated Santals and help each other in the field of counseling, educations, job opportunities, medical and legal advice and preservation of language and culture.

Ha has already published a book called “An unlikely tale of a Santal Villager in England” and has written a chapter HUL in a recently published book INTERPRETING SANTHAL HUL by SKMU university, Dumka Jharkhand. He is also planning to publish collections of his other writings soon.

Be the first one to write a review for the book History of Santals.