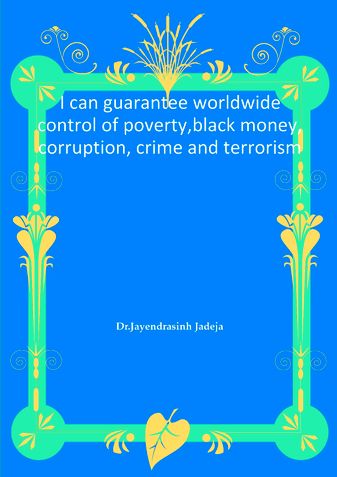 I can guarantee worldwide control of poverty,black money,corruption, crime and terrorism

This book is a non-fiction book about 'how to improve living conditions of millions of people around the world?'. This is just not a literature book wrapped in a beautiful words of literature, but this book is a result of the hard work of 30 years by the author who is leading scientist of the world in this field. This book can change the history of the world and can change the game " How to manage a nation?". The book also shows that the burning issues of the world can be solved easily if we employ the scientific solutions of the problems rather than employing the dirty tricks of the day to day politics!

Here in this book, he has described his full concept and how he tested his concept.
This concept was described by one of the leading intellectual of Gujarat as ‘Miraculous concept ‘.
There are mainly two aspects of his methods to control terrorism, crimes, corruptions and poverty.
I] derecognize cash currency from the entire Nation.
II] By identifying each and every resident individual, issuing each a personal identity number, getting all the detailed information of every resident and getting it uploaded in the internet/intranet.
There are following benefits from this action by the central government of that Nation.
All these points are discussed in details in this book by Dr. Jayendrasinh Jadeja

• Terrorism, organized crimes, Naxalism etc. can be stopped.
• Illegal migration can be stopped.
• Will get exact data of poverty and poor people.
• Getting rid of the biggest evil: black-money!
• 90% of corruptions will stop!
• Another very big advantage of removing cash currency from market is that it will have dramatically good controlling effect on Corruptions in various sectors! 90% of corruptions will go!
• Majority of serious crimes will be prevented.
• Stealing and Lootings will stop!
• Tracking of govt. money become s very easy:
• Mother of all corruptions; “corrupt behaviors of political leaders’ during election processes will either stop or will remain in control!
• It will be possible to accurately identify and pin point the poor individuals.
• All illegal ‘donations’, Capitation fee, indirect black money transactions in education sector e.g. admissions in medical education, engineering colleges, other professional colleges, will mostly stop.
• Heinous mass social crimes against women e.g. prostitution will almost stop!, because payments now are not made in cash!
• Exploitation of laborers can cease :
• Getting “almost 100% correct data” regarding the economical condition of the people.
• Illegal drugs trading will stop.
• Global Terrorism can be controlled.
• Great reduction in support network of criminals from prison.( where criminals are staying)
• Problem of illegal land possession will remain in control because if sufficient payment is not made to farmer/owner, it will reflect in records of electronic/paper money transactions.
• Almost disappearance of ‘Hawala scam’ (illegal money transfer from foreign countries.)! : This will be a great achievement!
• Lethal effect on deposition of black money in foreign banks, because these are illegal money parked in foreign banks, mostly by cash currency.
• The guarantee:
The original concept developer and presenter of this theory, Dr. Jayendrasinh Jadeja has agreed to give written guarantee of good results to any Nation.

Apart from above points, few more issues which are unsolved in developing Nations (e.g. India) has been described concisely by the author and also suggested few solutions based on his concept and scientific experiments.
These are following
- How to improve law, justice system within the Nation?
- How to improve working of police? Extensive reforms are suggested.
-How to win confidence of the tax-payers of the nation.
- How to avoid divisive politics within the Nation?
-Changes required to be carried out in political system of the country
-Preservation of the cultural identities of the Nation.

Dr. Jayendrasinh Jadeja, son of Madhavsinh Jadeja, originally belongs to a small village of Jabida (population today about 400 people), Tehsil: Dhrol, near historical city of Jamnagar, Gujarat, India. He was born on 2nd January 1957 and brought up there in village. He was brought up in a traditional Raj put Cultural environment where it was taught to sacrifice for the sake of Motherland, Pride, Truth and Ethics. So since childhood, he was very much fond of reading newspapers, knowing what is happening in around him? He was keenly observing poverty in the villages, corruptions in the system, erosion of ethics and values in and around him. So he was constantly thinking: how to solve these problems? He was very ‘fond’ of advising his parents, elder brothers about ‘importance of irrigation’ in agriculture by digging wells, creating ponds, lakes ! (At a tender age of about 10 years!)
At that time nobody took him seriously! His elder brothers were laughing on him!
When he started to go to school, he had a unique craze, ‘to stand always first in the classes! Almost always he stood first, but whenever he did not stood first in the class in two of the weekly tests, he was highly disturbed, tense person! Refusing to accept his defeat!
During his primary education, and middle school education, he was attending hardly 50 % of the academic term. Because they all brothers had to work in the farm for 3 months and three months of study! In each academic terms! But the unique thing was that even after not attending a single day in first three months, when he was attending on first day and appeared in the internal examination test, he was used to stand first in the merit! Because while he was working in the farms, he read the books, even solved mathematical problems without the help of any teacher! That was the unique happening! He worked hard and got national merit scholarship from Government of India for higher education from 1974 onwards. He also got liberal ‘education loan’ from Bank of India. He continued to work on some innovative projects during student life as a student in shree M.P.Shah medical college, Jamnagar. He was awarded ‘fellowship for sports medicine during his internship by the prestigious “Netaji Subhash National Institute of Sports, Patiala, India”.
He got admission in M.D.Radiology as post graduate resident at Jamnagar at parent institute. But after 12 days, he left the course, as he was not satisfied with routine work of clinical side. He was crazy to do something ‘new and innovative’. He was also very much fond of ‘talking’ and sharing knowledge with others. He appeared for competitive examinations of recruitment conducted by Gujarat public service commission. He passed all the three examinations and was selected as tutor in physiology, pharmacology and preventive and social medicine. Finally he chose to work in physiology. He joined as tutor in physiology on 7th April 1983 at mother institute shree M.P.Shah medical college, Jamnagar. Along with this he joined M.D.Physilogy post graduate degree course and passed M.D. degree in January 1986. Since then he is working as a faculty in physiology at premier medical institutes of Gujarat state, India. A present he is working as the professor and head of the department of physiology at the biggest medical college of India: B. J. medical college, Ahmadabad since 2003 till date.
Mean time he was always interested in solving the problems of the most poor and the neediest people. He identified unique problems of widow ladies in Gujarat and found that they are totally helpless, the most poor and deserving persons to be helped. So he proposed a “widow pension scheme” to any widow until she does not remarry, and for those who are poor, helpless. After 10 years of severe struggle with the governments, he ultimately succeeded in getting ‘widow-pension’ scheme sanctioned by the govt. of Gujarat in December 1997 on permanent basis. Although he could get sanction temporary schemes sanctions earlier also. During this 10 years period, seven governments changed in Gujarat! Even n these volatile times, he did not lose hope! He founded and Presided “Rashtriya Nagrik Paridhad” and tried to garner support of like minded citizens

Apart from being a very popular and sincere faculty, he was very much interested in solving serious issues faced by the nation and the world. So he slowly trying to develop the ways and means to improve public management, public administrations, reduce corruptions in public administrations, reduce crimes, reduce risk of terror attacks, control poverty, to collect accurate data of poverty, accurate data collection of potential terrorists, study of people who try to hide their identity.
In meantime his book was published titled “chingaree” means a flame of revolution. In this book (published on 3rd Sept 2007), he first time described in detail the need to introduce “unique personal identity numbers” in India. He also presented this whole concept to government. of India very first time through the social platform “ Rashtriya Nagrik Parishad.” The govt. of India ultimately accepted the proposal and introduced the project of unique identity identification in India. This was his one of the biggest achievements.
He did not believe in just complaining! He himself initiated and founded several good education institutes with help of his co-workers mentioned in acknowledgments:
1] Shree N.K.Jadeja Raj put Kanya Chhatralaya, , Rajkot.
2] Baashree Heeraba Ramsinhji Raj put Kanya Chhatralaya, Jamnagar
3] Baashree Nayanaba Mahendrasinh Raj put Kanya Chhatralay, Surendranagar,
4] Baashree Nayanaba Mahendrasinh Jadeja IAS study centre and hostel at Ahmadabad
5] Raj put Kuldevi Mandir which was a temple of humanity to be used for accommodation of relatives of patients admitted in the biggest hospital of Asia ‘civil hospital, Ahmadabad’, irrespective of caste, creed, religion, etc.
And few other projects initiated by him are under construction and various stages of development.
In doing above social work “honesty” was the main working principle and his powerful tool to earn reputation among donors. He believes “anybody can earn crores of money, but to find a honest man even after paying crores of Rupees, is not easy!” Everybody can not earn reputation as a honest person.
He also organized several program in memory of martyrs of Indian soil.
Meantime he wrote a very popular book “Rajputani” published in 2000 A.D., since then four editions of this book is published. He also wrote a book “Modern physiology-cardio-vascular system” published in 1999 A.D.
Since 2006, he is actively working on “governance science”.
When agitation against corruptions started in India, he again thought exclusively on the subject. He was constantly thinking on the subject; some times throughout the whole night! Then again on the next night! He formulated several plans and concepts, rejected them. Ultimately he came to the final conclusion titled as“miraculous concepts of Dr. Jayendrasinh Jadeja”. He has developed several original concepts and scientifically tested these concepts to prove its efficiency. Ultimately he could reach to a breakthrough and could develop “miraculous concepts” which has capacity to change the history of the world! These concepts have the capacity to drastically reduce poverty, can effectively control corruptions in public as well as public administrations, can control ‘black money’ which is almost a huge parallel economy in all developing nations. These concepts of Dr.Jayendrasinh Jadeja’s theory can become powerful tool to control terrorism and organized crimes worldwide or in a nation.
He has advocated for a separate branch of science “governance science”. He proposed that a new branch of science may be founded worldwide to streamline all scientific progress in the field of public and private administration. He is the fonder President of the International Association of Governance Science.
This book; in a way is one very important publication describing these principles of “Dr. Jayendrasinh Jadeja’s miraculous concepts” first time ever. These are completely original, de novo, innovative concepts which are tested by him. So this contribution of the author will remain a historical land mark for times to come.

I can guarantee worldwide control of poverty,black money,corruption, crime and terrorism

Be the first one to write a review for the book I can guarantee worldwide control of poverty,black money,corruption, crime and terrorism.

Waiting For Us
Utkarsh Kansal