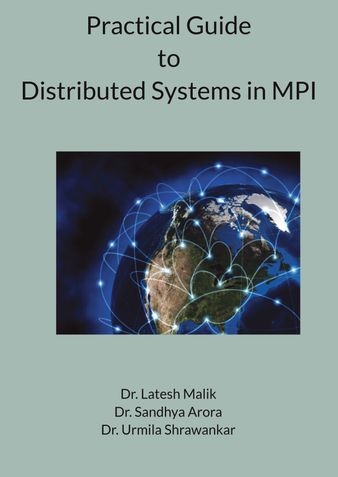 This book demonstrates the practical implementation of distributed systems by using the recent open source compilers and environments. Faculties and students can use this book as laboratory manual for distributed operating system.

Message Passing Interface (MPI) is a standardized and portable message-passing system developed for distributed and parallel computing. MPI gives user the flexibility of calling set of routines from C, C++, Fortran, C#, Java or Python. The advantages of MPI over older message passing libraries are portability and speed.

Practical implementations are mostly in MPI but few practical are in C++, JAVA. It covers all details from implementations (coding) to the results (outputs) clearly. JAVA RMI, CORBA examples are also covered. Hadoop implementations and commands on HDFS are covered to learn distributed file system.

Installation and implementations suggested in this can be on Windows or Linux Platform. Linux operating system is preferred.

Be the first one to write a review for the book Practical Guide to Distributed Systems in MPI.

Other Books in Computers & Internet, Engineering