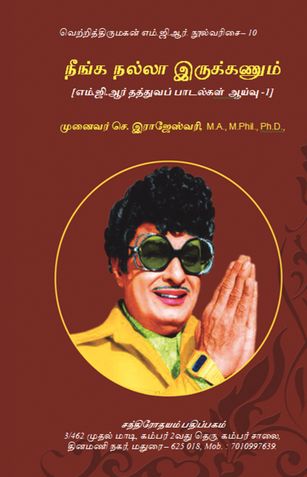 When the Tamil movie industry was primarily dialogue-driven, MGR turned the tide around by packaging small pockets of profound wisdom in his film songs.

The profound meaning and wisdom in MGR’s film songs were highly liberating and morale-boosting for the common folk, who cherished the songs delivered by MGR close to their heart.

The songs hit the bull’s eye of the heart of the common man whose mundane sufferings in life they addressed. Yet, they had so much of heightened esoteric philosophy inherent in them in different multiple layers.

Such was the magic of a combination like MGR as the protagonist delivering the lines of Kavi Arasu (King among Lyricists) Kannadhasan, Paavendhar Bharathidasan, Bharathiyar and so on and so forth.

Not only did the songs enchant the common folk, the coolie to the multi-millionaire, women, children and the older folk, they also helped the political ascent of MGR to the stature of three-time Chief Minister of the state, Tamil Nadu.

Such magic, such mega events, such a brobdingnagian success story and a huge proportion of what caused them, the songs, the insights they shed into our lives and how all of them come together to make a great leader and a great society do warrant a read.

This book will sure give us an idea of how elements of fame, success and glory work at both the micro and macro levels. Neenga Nallaa Irukkanum is one such read. Go for it, if you want to know the elements that contribute to fame, immeasurable success, glory and all-time greatness.

Dr Rajeswari Chellaiah is a translation with a Ph. D. in translation studies. She has translated some of the most culturally significant works without any loss of meaning in translation. Of them, she is best known for her works on MGR, which she has authored.

She has written over ten plus books on MGR, his life, times, success, fame and glory. Of them, the current book "Neenga Nalla Irukkanum" analyzes the aspects that led to his peak of a stardom and his political ascent to the stature of three-time Chief Minister of the State of Tamil Nadu.

For those interested in exploring how words and lyrics contributed to the brobdingnagian success stories of MGR, and to explore fame, glory and success in general, this book and the rest of the books on MGR will sure be great reads.

Dr Rajeswari Chellaiah has thrown a lot of insights into how the enigmatic and phenomenal success of MGR as a movie star and politician happened, which is why this book and the other books in the series are must reads, for Tamils all over the world.

Other Books in Biographies & Memoirs, Entertainment

Musings Of A Homemaker
Shalini Gupta