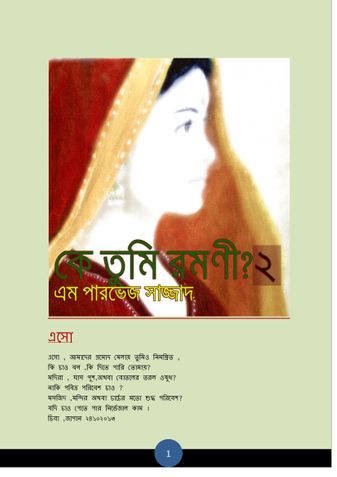 In the popular culture of Bangladesh, Parvez's most well known contribution is the song Ke Tumi Romoni? , popular ever since it was written. In 1996,
Biography

Parvez Sazzad was born on January 6,1978 in Khulna division, Bangladesh. He penned a good number of poetry collections and a skilled organiser also.

Poet Parvez Sazzad moved to Japan as he fallen in love with a japanese girl, named Chiba Naoko.He got married with chiba naoko in 2010 after 8 years of successful affair.But his conjugal life comes to ann end in 2013 after just 2 years and 3 moths of a married life, Hw currently residing in Japan.Recent days managing his web based Bangla entertainment network, known as dhamakabd.com as well as writting in regular basis.

Be the first one to write a review for the book কে তুমি রমণী ২ (ke tumi romoni 2).

Ripples By The Hillside
Vishnu Sampoorn