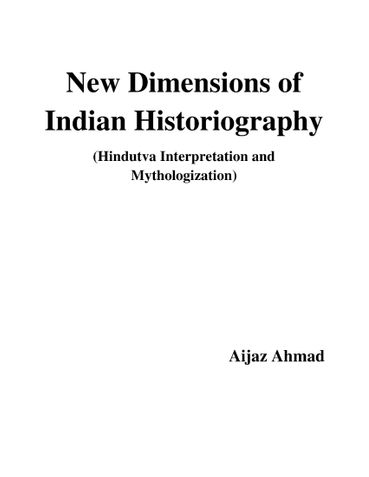 In this work, “New Dimensions of Indian Historiography” the whole period of Indian history, from Vedic to the current period, has been widely and accurately discussed. Along with different schools of historiography, the new emerging Hindutva historiography has been widely discussed. The so-called controversial kings and events which raise the eyebrow of the Hindutva historians have been especially discussed by mentioning the original sources. The relations between Aurangzeb and Shivaji, Akbar and Maharana Pratap, which works as a tool of spreading hatred between Hindus and Muslims have been proved as political and not at all religious relations. The intentionally raised controversy over the mosque at Ayodhya, Taj Mahal, and other heritage buildings have also been widely discussed by quoting the original sources and unbiased hypotheses.

Dr. Aijaz Ahmad was born on 16th August 1969 at Motipur village in Sant Kabir Nagar district of Uttar Pradesh. After completing his early education in Motipur, Santha, and Basti, he joined the Aligarh Muslim University in 1985 and completed B.A. (Hons), M.A., M.Phil., in History. He also qualified NET and JRF tests conducted by University Grants Commission. In 2000, he obtained a Ph.D. degree from Jamia Millia Islamia, New Delhi in Modern Indian History. In 1994, he was appointed as a lecturer in History in YMD College Nuh affiliated to the Maharshi Dayanand University, Rohtak. In 2004, he was promoted to Associate Professor in the same college. During his service career, he attended many national and international conferences and got published 11 research papers. In the same period, Dr. Ahmad got published ten books by different reputed publications. The published books are: 1. Indian Muslims Against British Rule, 2. Sir Syed, Aligarh Muslim University and National Politics, 3. Mewati Rebellion of 1857, 4. Uprising of 1857, 5. History of Mewat, 6. Cultural Heritage of Mewat, 7. Haryana Ka Itihaas, 8. Poorv Aupniveshik Bharat Me Vigyaan Tatha Praudyogiki, 9. Triple Talaq, 10. Democracy and Discontent in India. This book ‘New Dimensions of Indian Historiography’ is the eleventh book of Dr. Ahmad.

Be the first one to write a review for the book New Dimensions of Indian Historiography: Hindutva Interpretation and Mythologization.

Who made INDIA?
Sai R Vaidyanathan

How was India’s Area Increased by 40% ?
Rajnikant Puranik