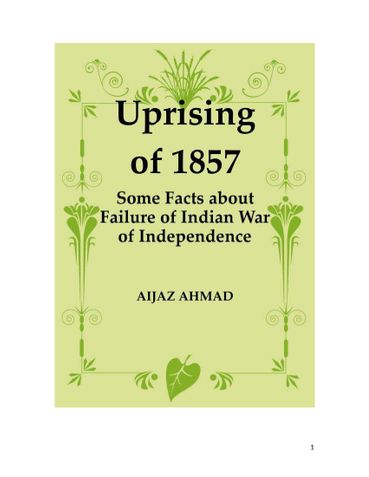 Some Facts about Failure of Indian War of Independence

This book entitled, “Uprising of 1857: Some Facts about Failure of Indian War of Independence” includes much detail on the nature and character of the Uprising of 1857. Although, it is a general history, which emphasizes every aspect of the Uprising, throws much light on the events, places, and personalities directly concerned to the Uprising of 1857. Many dimensions of the Uprising particularly distinct perspectives such as popular, national, military, religious, etc. has been analyzed in the modern context, and independent research and thinking. The role of different personalities also has been re-evaluated in the light of contemporary and primary sources. By writing this history the author has presented a new look of the Uprising based on critical analysis of the historical facts. This book is a humble attempt to remedy the deficiency which the author has felt after long experience of reading and writing history. The British, slowly and gradually snatched the political power of India from the Native rulers and on the pretext of moral improvement, the British Government adopted intolerant religious policy, which led to the conversion from oriental religions to the Christianity. Both Hindus and Muslims of this country began to feel that their religion was in danger, and particularly the Muslims due to their fanatical pride, and resented the Christian supremacy. Initially the Indians resented the policies of the British Government and mobilized the civilian and militia through the famous chapati and lotus distribution. Finally on 10th of May, the final rising exploded from Meerut which followed the long fight throughout North India. The titular Emperor Bahadur Shah Zafar was enthroned in the Red Fort, and Delhi was made, once again, the capital of India. The entire history covered under different chapters of this book shows the real picture of the revolt. The whole topics are quite interesting, full of knowledge, and based on authentic sources with little hypothetical narrations.

Dr. Aijaz Ahmad was born on 16th August, 1969, at Motipur village in Sant Kabir Nagar district of Uttar Pradesh. After completing his early education in Basti, he took admission in AMU Aligarh in 1985 for higher studies and completed B.A. (Hons), M.A. and M.Phil. in History. He also qualified NET and JRF test conducted by UGC. In 2000, he obtained his Ph.D. degree as a teacher candidate from Jamia Millia Islamia. In 1994, he was appointed as a lecturer in History in YMD College Nuh in Mewat District of Haryana. New Delhi. Now he is working as Associate Professor in History department of the same college. In his service career in the same college he got published nine research papers in national and international journals and proceedings of the Indian History Congress. He has also got published four books titled “Aligarh Muslim University: An Educational and Political History, 1920-47”, “Mewat: A Retrospective”, “Indian Muslims Against British Rule” and “Uprising of 1857”.

Be the first one to write a review for the book Uprising of 1857.