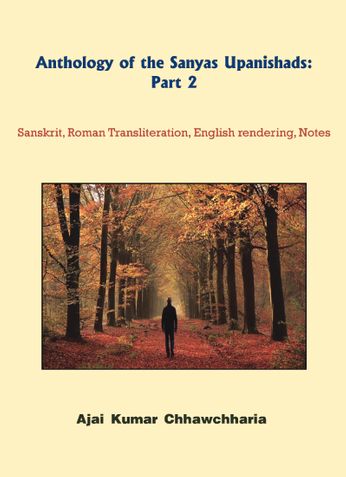 This is the 2nd Part of the 2-part Book titled ‘Anthology of the Sanyas Upanishads’. The Book is a unique compilation in English of all the Upanishads dealing with the mystical theme of ‘Sanyas’. The Sanskrit word “Sanyas” (pronounced as ‘Sun-yaas’) briefly means renunciation of, dispassion towards and detachment from all things pertaining to this material, mundane, gross and mortal world. It is a spiritual path which helps the person to find liberation and deliverance for his soul from all sorts of entanglements associated with life in this world, and attain eternal peace, beatitude and bliss for himself. It is a path that leads to his ultimate salvation and emancipation.
These two Books describe in detail the philosophy of Sanyas, its way of life and vows, the characteristics of the followers of this spiritual path, their way of thinking, their demeanours, their feeling of fulfillment and ecstasy as well as the spiritual rewards that accrue to them, and all other matters related to this eclectic theme.
According to the tenets of Hinduism, a person is expected to adopt a life of Sanyas after fulfilling all his obligations in this world, but if true realization and self-awareness arises in his heart any time earlier on in life he can take this spiritual path when it so happens and his inner-self inspires him to do so in an honest way.
Since the Upanishads represent the pinnacle of spiritual philosophy, metaphysics and theology, they therefore are the best source from which we can learn about these principles and their related topics, which includes, of course, about ‘Sanyas’ that is the theme of our Book.

Be the first one to write a review for the book Anthology of the Sanyas Upanishads: Part 2.

Death: Before, During & After… (In Bengali)
Dada Bhagwan