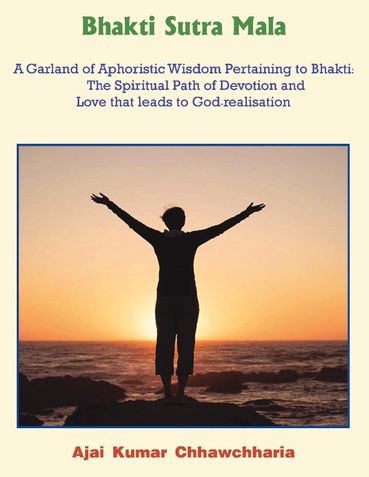 A Garland of Aphoristic Wisdom Pertaining to Bhakti: The Spiritual Path of Devotion and Love that leads to God-realisation

‘Bhakti Sutra Mala’ is a wonderful and comprehensive Book of Aphorisms on Bhakti, the path of devotion, affection and love for Lord God. This Book removes all doubts in the mind of a seeker regarding the importance of Bhakti, and why it is an important spiritual tool and the best path to God-realisation. In the spiritual realm, Bhakti (devotion, affection and love) for Lord God is of tremendous and singular importance.
This Book is aptly titled ‘Bhakti Sutra Mala’ as it is like a symbolic ‘Garland (Mala)’ of ‘Sutras (Spiritual Wisdom in the form of Aphorism)’ pertaining to ‘Bhakti (devotion and love for Lord God)’. It brings under a single cover the most brilliant of scriptural Texts in Hinduism that deal with the eclectic subject of Bhakti. The excellent Texts that have been included in our Book are the following: Ram Charit Manas (Chapter 1); Dohawali (Chapter 2); Adhyatma Ramayan (Chapter 3); Tripadvibhut Maharnaryan Upanishad (Chapter 4); Krishna’s Geeta—canto 12 (Chapter 5); Narad Bhakti Sutra (Chapter 6); and Shandilya Bhakti Sutra (Chapter 7).
The Book contains the Roman Transliteration of the Texts followed by detailed exposition in English along with elaborate explanatory notes.
All learners need an easy to read and understand guide-book to help them grasp the essentials of the subject of their interest. Similarly on the spiritual path too an aspirant would need guidelines and a road map to show him the correct way forward, to tell him what to do in order to achieve success in his spiritual endeavours and warn him against the various pitfalls and how to avoid them, to provide him with some benchmarks against which he can judge his success, and at the same time tell him the wonderful reward that awaits him if he follows the instructions properly.

Be the first one to write a review for the book Bhakti Sutra Mala.