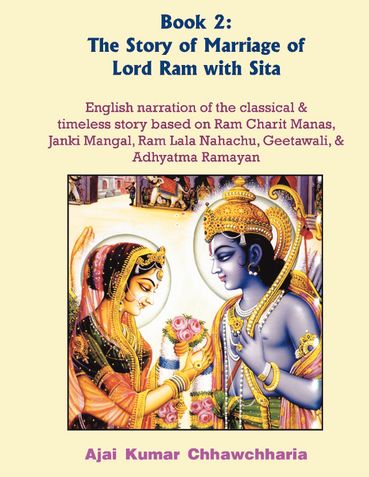 Book 2: The Story of Marriage of Lord Ram with Sita (eBook)

This is the 2nd Part of the Omnibus Edition of the 3-Part Book titled “The Story of Lord Ram’s marriage with Sita”.
This is a lengthy story spanning five classical books, viz. Goswami Tulsidas’ (i) Ram Charit Manas, (ii) Janki Mangal, (iii) Ram Lala Nahachu, (iv) Geetawali Ramayan, & (v) sage Veda Vyas’ Adhyatma Ramayan.
Since the real joy would come with delving deeply into the story without cutting corners for sake of brevity, allowing one’s self to leisurely enjoy its beauty and charm that are nectar-like—and also because I wished to present to the reader a detailed account of the entire event in a chronological manner and exactly as they are narrated in the original texts, while doing my best to explain the text in a fine manner and endeavouring to bring out many subtle meanings and nuances that are not apparent and would be missed if I had attempted for brevity in my narration to shorten it—this volume became so thick that it needed Three Books to do justice to the story itself.
All the Three Parts of this Book have the original Text along with their verse-by-verse Roman Transliteration which is followed by a detailed exposition in English with further notes.
Book Part 2 picks up the story from Book Part 1. It describes the rest of the story from ‘RAM CHARIT MANAS’, i.e. from the time preparations were made for the departure of the marriage party from Ayodhya for Janakpur, till the end of the story when the grooms’ party consisting of the four brothers, viz. Lord Ram, Laxman, Bharat and Shatrughan, returned with their respective brides to a rousing reception at Ayodhya, which was followed by celebrations and festivities in the city for many long days, and culminates with the departure of the guests as well as sage Vishwamitra for their respective places.
Remember: This is not an ordinary tale of a prince’s wedding, but a virtual “holy book” as it narrates the union of two great divine forces of creation, one known as ‘Brahm’, the Supreme Being and Lord of creation in the form of Lord Ram, and the other known as ‘Shakti’, the dynamic cosmic powers of the Lord in the form of Sita. This union resulted in the creation of a stupendous force powerful and astoundingly potent enough to neutralize and eliminate all the negative and evil forces in this world which were not only tyrannizing and tormenting humble creatures but were also decimating all the principles of Dharma, the rules of law, good conduct, propriety and morality. This helped the Lord to restore the glory of Dharma and bring peace and happiness to this world. Without this union, which the world celebrated as the ‘marriage of Lord Ram with Sita’, this task was impossible.

Book 2: The Story of Marriage of Lord Ram with Sita

Be the first one to write a review for the book Book 2: The Story of Marriage of Lord Ram with Sita.

Secrets of Divine Love
A. Helwa