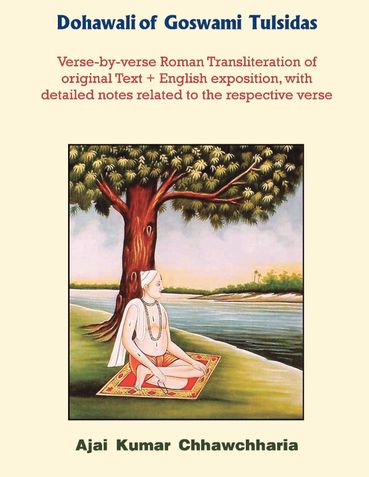 This Book is a full English exposition of ‘DOHAWALI’, a book of wonderful 573 two-line verses called ‘Dohas’ that had been composed by the renowned 16th century legendary Indian saint-poet Goswami Tulsidas.
DOHAWALI has the entire original Text along with its Roman Transliteration that is followed by verse-by-verse English version, and is augmented by notes and further explanations.
Since these ‘Dohas’ are stand-alone verses, each distinct from the other and together covering a wide variety of topics, two special indices are provided that help the reader, one at the beginning and one at the end. The first index lists the Dohas according to their topics, and the second index according to selected keywords. This book also includes a life-sketch of Tulsidas along with a list of all the books he had written and a brief note about each of them.
The ‘Dohas’ of DOHAWALI are a priceless collection of pearls of wisdom and gems of priceless advice that this blessed saint Tulsidas offers to us as a guide to answer so many questions that arise in our minds and for which we seek a practical answer. The ‘Dohas’ show us how Tulsidas closely observed the world and deductions that he arrived at. They are devotional as well as secular in nature, covering a wide variety of subjects, both mundane as well as ethereal, temporal as well as spiritual. A lot many of these verses are also included in Tulsidas’ famous epic known as ‘Ram Charit Manas’, a narration of the story of Lord Ram that is popularly known as the Ramayana.

Be the first one to write a review for the book Dohawali of Goswami Tulsidas.