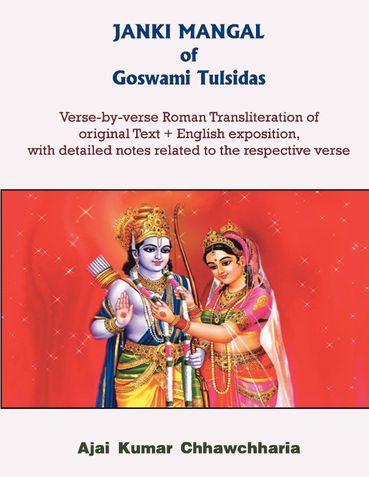 In this book we shall read the story of Lord Ram’s marriage with Sita as narrated by the famed Indian saint-poet Goswami Tulsidas in his classic book known by the name of “JANKI MANGAL”. This book is entirely dedicated to this theme.
Here, Goswami Tulsidas describes the full story of Lord Ram’s wedding ceremony in his unique and famed style consisting of melodious verses that are his hallmark, and which make the reading and recitation of these verses exceedingly captivating for the mind and heart as they are exceptionally enthralling, charming and melodious like the rest of his compositions.
The verses of Janki Mangal are sung with great enthusiasm and reverence during marriage ceremonies in Indian households, and are considered auspicious and harbingers of good luck for the bride as well as the groom as they invoke the blessings of Lord Ram and Sita, the divine couple who were human incarnations of the Supreme Being and his Shakti respectively.

Be the first one to write a review for the book JANKI MANGAL of Goswami Tulsidas.