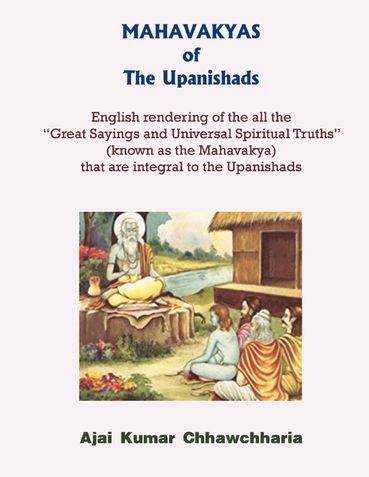 MAHAVAKYAS of the Upanishads (eBook)

In this book we shall read about the great Spiritual Truths, known as the ‘MAHAVAKYAS’ (pronounced as Mahaa-vaakyaas), that are enunciated, expounded, elucidated and proclaimed by the magnificent great scriptures of India known as the Upanishads which have been inspiring the seekers of the Truth and the Reality of life and existence since the dawn of civilization.
This book has three Chapters—(a) Chapter 1 is titled ‘What are the Upanishads’, and it introduces the reader to the Upanishads, their importance and import, a knowledge which is essential as the Mahavakyas are an integral part of them.
(b) Chapter 2 is titled ‘Mahavakyas of the Upanishads’, and is divided into five Sections. Since there are five divisions of the Vedas, and since the Upanishads and their Mahavakyas are parts of these Vedas, this format helps to bring together all the Upanishads of one particular Veda and their Mahavakyas under one Section. The relevant Upanishads and their Mahavakyas are narrated in simple English with explanatory commentary.
(c) Chapter 3 is ‘Thoughts of a Spiritually Enlightened & Self-realised Person’. As the name suggests, it enlightens the reader the benefits one gets if one fully grasps the meaning of the Mahavakyas, and how this wisdom profoundly changes one’s attitude and approach to life and its problems, not to mention the bliss and peace that one derives as a consequence.

MAHAVAKYAS of the Upanishads

Be the first one to write a review for the book MAHAVAKYAS of the Upanishads.