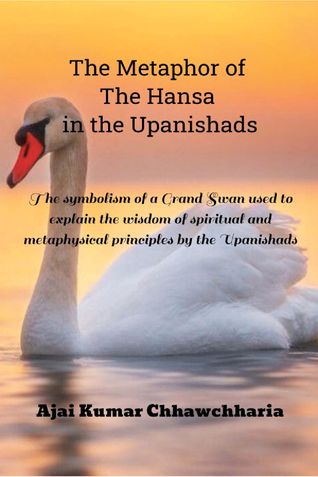 The Metaphor of The Hansa in the Upanishads (eBook)

In this Book we shall read how the Upanishads have used the term ‘Hansa’, a divine Swan, as a symbol to explain the wisdom of spiritual and metaphysical principles.
The ‘Hansa’ represents a wise person who has realized the ultimate Truth of his self and the Reality of existence, one who has attained the highest state of pure Consciousness and become one with the Absolute. The Upanishadic verses quoted in this book tell us about the thought processes of enlightened souls, how they feel and think about themselves vis-à-vis the external world of falsehoods. Such Hansa-like souls are able to remain calm and peaceful internally amidst the turmoil of the surrounding world. Since they have purified their inner-self and have a clear intellect, they can judiciously pick the right path to be followed in their lives with a clear understanding of it, which enables them to reach their ultimate goal of attaining deliverance, emancipation and salvation that grants eternal bliss, peace and beatitude without facing undue hurdles on the path. It will not be wrong to say therefore, that since they are personified forms of purity of soul and its holiness, they represent Brahm, the Supreme Being himself, personified in their forms.
This Book is a comprehensive compilation of all the original verses of the different Upanishads that are relevant to our theme, along with their Roman Transliteration and extensive / exhaustive commentary on each of them in English. Besides this, we have also incorporated verses from Tulsidas’ books, viz. Dohawali and Ram Charit Manas. The three appendices of this Book deal with the concepts of (i) The Chakras and Naadis in the body, (ii) The different States of Existence of Consciousness, and (iii) The concept of Mantra and Japa in a succinct manner.
The following fifteen Upanishads have been quoted in our Book:
(A) Shukla Yajur Veda: (1) Hansa Upanishad. (2) Parma Hansa Upanishad.
(B) Krishna Yajur Veda: (3) Shwetashwatar Upanishad. (4) Tejobindu Upanishad. (5) Dhyan Bindu Upanishad. (6) Brahm Vidya Upanishad. (7) Yogshikha Upanishad. (8) Yogtattva Upanishad, verse no. 99. (9) Varaaha Upanishad.
(C) Sam Veda: (10)Yogchudamani Upanishad.
(D) Atharva Veda: (11) Naradparivrajak Upanishad. (12) Pashupat Brahm Upanishad. (13) Mahavakya Upanishad. (14) Hayagriva Upanishad. (15) Dattatreya Upanishad

The Metaphor of The Hansa in the Upanishads

Be the first one to write a review for the book The Metaphor of The Hansa in the Upanishads.