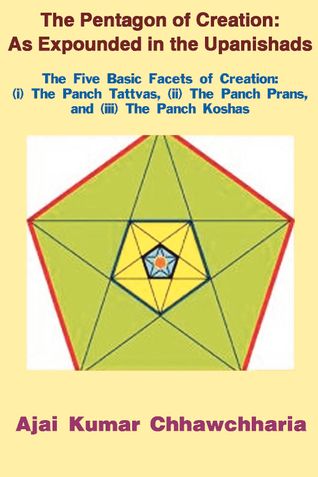 The Pentagon of Creation: As Expounded in the Upanishads (eBook)

This book titled “The Pentagon of Creation: As Expounded in the Upanishads” explains in English the phenomenon of Creation which has five basic units that are fundamental to understanding its esoteric mystery. It is based entirely on the Upanishads.
These units are: (i) The Panch Tattvas (5 Bhuts or elements), (ii) The Panch Prans (5 vital winds or life forces), and (iii) The Panch Koshas (5 sheaths or cells).
The Upanishads have gone to great length to unravel this cosmic secret that has mystified even the most enlightened and the learned ever since the dawn of civilization. The Upanishads are renowned for their methodical and analytical approach towards any subject they deal with, systematically analyzing things and being comprehensive in their exposition.
This book will fill a great void on this subject, and since all the relevant Upanishads are included, it will be comprehensive as well. Only the English rendering of the Upanishads are included as this book is primarily meant for English speaking world where the original language used in the texts, i.e. Sanskrit, is unreadable, and hence irrelevant.

The Pentagon of Creation: As Expounded in the Upanishads

Be the first one to write a review for the book The Pentagon of Creation: As Expounded in the Upanishads.