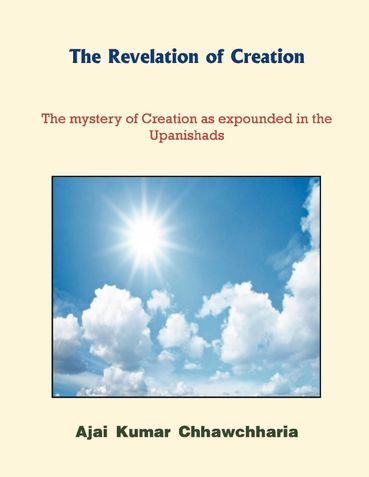 The Revelation of Creation (eBook)

The mystery of Creation as expounded in the Upanishads

This kindle edition of the book titled “The Revelation of Creation: As Envisioned in the Upanishads” explains in English this mysterious phenomenon as it has been understood and expounded in the Upanishads. All the Upanishads that describe this cosmic process have been brought together under one cover in this wonderful book that seeks to unravel this puzzling phenomenon. The Upanishads have been grouped under separate Chapters according to the Vedas they belong to. Some interesting part of the Holy Bible relevant to this theme is also included in the beginning of the book.
This subject has perplexed human kind since the dawn of civilization, and our ancient sages and seers have attempted to answer and explain the various facets of this cosmic process in great and logical detail in the Upanishads which are renowned for their methodical approach towards any subject they deal with, systematically analyzing things and being comprehensive in their exposition.
This book will fill a great void on this subject, and since all the relevant Upanishads are included, it will be comprehensive as well. Only the English rendering of the Upanishads are included as this book is primarily meant for English speaking world where the original language used in the texts, i.e. Sanskrit, is unreadable, and hence irrelevant.

The Revelation of Creation

Be the first one to write a review for the book The Revelation of Creation.

A Mind Without Craving
Delson Armstrong

Nationalism - Before the Virus
Rajiv Baniwal