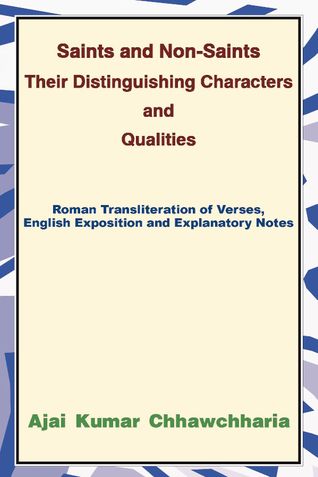 Saints and Non-Saints Their Distinguishing Characters and Qualities (eBook)

This Book presents a comprehensive and exhaustive picture of the wonderful characters and noble qualities of Saints that make them so desired and honourable in the world, as well as the evil nature and the ignoble traits of Non-Saints that makes them so dishonourable and warns us to be wary of them. So while Saints bring joy and happiness and peace for all, Non-Saints bring pain and suffering for them.
For the purpose of studying the distinguishing characters of Saints vis-à-vis Non-Saints, we shall read from some of the well known spiritual texts such as Tulsidas’ Ram Charit Manas, Vinai Patrika, Vairagya Sandipani and Dohawali, Veda Vyas’ Adhyatma Ramayan, some selected Upanishads, and the Holy Bible.
The scriptural Verses have been quoted in original alongside their Roman Transliteration, which is followed by a detailed exposition in English and aided by explanatory notes. The unique feature of this Book is a study of the Holy Bible which gives the reader a holistic view of the subject.
The Book has 4 Chapters as follows:-
Chapter 1: Character Traits of SAINTS based on (a) Goswami Tulsidas’ books such as (i) Ram Charit Manas, (ii) Vairagya Sandipani, (iii) Dohawali, (iv) Vinai Patrika; (b) Veda Vyas’ Adhyatma Ramayan, and (c) The Upanishads.
Chapter 2: Character Traits of NON-SAINTS based on (a) Ram Charit Manas and (b) Dohawali of Goswami Tulsidas.
Chapter 3: Comparison of SAINTS and NON-SAINTS based on (a) Ram Charit Manas, and (b) Dohawali of Goswami Tulsidas.
Chapter 4: Character Traits of SAINTS and NON-SAINTS, and the rewards that accrue to a Saintly Person, based entirely on the Holy Bible.

Be the first one to write a review for the book Saints and Non-Saints Their Distinguishing Characters and Qualities.