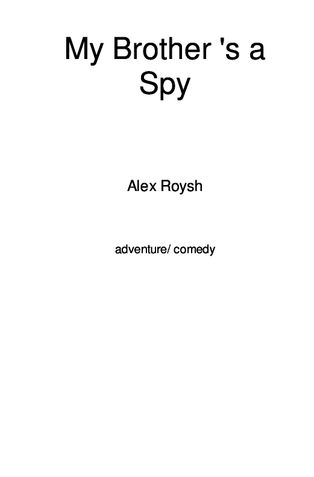 My Brother 's a Spy (eBook)

The story begins with a wily Kremlin plot to ship a boatload of high-tech Russian and German arms to Argentina, and, in this way, spark the second Falkland War. The MI6's tardy attempts to derail the deal are wrecked by the German intelligence. While the British military are at their wits' end, two honest and uncompromising brothers, Englishmen from Holland, take the lead. After a series of dramatic, funny, seemingly impossible events, the arms ship finally deviates from its course and beaches on a rugged shore – little more than eight thousand miles away from its goal.

With its forty-four funny/ comical episodes, sandwiched between tough and dramatic ones, this novel is both full-blooded thriller and prime entertainer, for a price under fifty Rs.

The book also touches on deeper issues like truth, happiness, (gratifying) sex and invisible reality. 'My Brother, the Spy' was written to be a reader's friend for a lifetime (to be re-read every couple of years).

Alex Roysh, a descendant of a famous Cossack (cavalry) military family, was born in 1966 in the country that was, and still is, a headache for the CIA, British MI5, Israel's
Mossad and German BND: Russia. In those totalitarian, slowly changing times, the air was still filled with fear and suspicion. Neighbours and work colleagues informed on each other, and the heavy hand of the State was on everything and everyone.

As a power-hungry, secretive, non-drinking (a big rarity in Russia) and smart young man, Alex eyed the intelligence carriere. He wanted to be in the thick of an unseen battle, tried himself to become a secret agent, not just watch movies about the Soviet spies – best in the world.
The opportunity came two years later. During compulsory Army service, he filed an application for the Special Service Academy. It remained unanswered, but not unnoticed. Soon after his discharge, he was summoned, for no apparent reason, to a Militia (Soviet police) station. A middle-aged gent with a characteristic deadpan face sat by the table. A KGB man!

After a long, harrowing talk, Alex was asked to come to another meeting. Then, to third. Weeks rolled on, no concrete answers appeared. Finally, he was called on a certain afternoon. The man who talked to him first waited in a cafe. Alex got a train ticket and an envelope containing roubles. “We entrust you to gather information in Lvov. The first task began brusquely. Train departs in an hour.” Nothing to write down while on the way. Do not return by the same route.”

Within the next two years, Alex toured the Baltic States and Ukraine gleaning unclassified data and writing reports. It wasn't the type of job he asked for, actually, but he soon learned the first rule of an 'unseen man': don't be overly curious. Curiosity didn't only kill a cat (to recall an English proverb).

Then, in the late-Gorbachov era, times became tough for the Soviets in general, and the KGB in particular. An internal counter-intelligence school in Kiev was about to close in the wake of expected Ukrainian independence. At the same time, demand for exacting counter-intelligence staff surged. They had to be recruited in some way from volunteers.

A lot was going on behind the scenes. Non-government organisations and new independent-minded political parties (a great no-no in Soviets) were budding on the fringes of the crumbling empire. The KGB suspected those 'new sprouts' to be watered by CIA or its allies (which was often right). Hundreds of new appointments for tapping, watching, informing, infiltrating and analyzing sapped most of the old guard personnel dry. A manpower vacuum loomed. There could be no vacuum, though.

Parallel to his secret power dreams and acts, Alex met, while still in the Soviet Army, a fellow soldier, a son of a German pastor from a Baltic state, who seemed to have a 'kernel', a sort of inner peace, longed-for normality, or even more than that. The comrade told Alex about the existence of God and the Bible and even smuggled a copy of the Bible for him to read, risking three days in penal duty.

After military service, busy with exploits for the good of the disintegrating State, Alex began to attend, on the sneak, independent church services in Ukraine or Latvia (some little 1200+ miles away from his home in southernmost Russia). He knew he was being watched. He also knew the consequences. Still, he wouldn’t stop. He wanted the same 'kernel' inside that he saw in the heart of that German youth.

Then came his X-day. His 'tutor officer' barged in his flat uninvited and opened a locked door without a key. Alex was alone. The officer sat down and switched the radio on, to block any possible sounds from seeping outside. Alex waited in silence. He knew it could be his last day of freedom. An insider's informal contacts with 'foreign religious cults' and foreign nationals were regarded as treason. And a count of treason could mean twenty--five years in jail. Or worse, as Litvinenko's fate shows. *

In a couple of months, it was all over. Alex reined the lean, young, and pranky 'horse' of his life into the footsteps of the Person he met in the Bible. He never regretted his
choice.

My Brother 's a Spy

Be the first one to write a review for the book My Brother 's a Spy.

A Quest of Twists
Pranav Nair