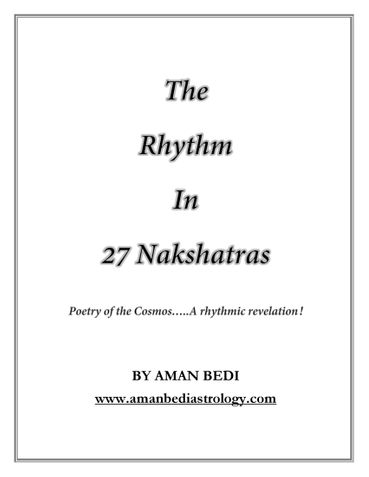 The Rhythm in 27 Nakshatras- Poetry of the Cosmos.. A rhythmic revelation (eBook)

Poetry of the Cosmos…..A rhythmic revelation!

When I see Nakshatras, I see a pattern! What comprises of a Nakshatra? What defines Nakshatra? Is it the shape of the constellation in the sky, is it the ruling planet, is it the deity or is it the combination of all these or is it much more? In my opinion, we can’t exactly be sure of what the Vedic seers perceived them as but we can use the available data and information to extrapolate further and use same for directing our life towards our dharma.

In a recent post that I wrote on how the Grahas received their names and what did the Vedic seers who named them perceived them as, I discussed how the nomenclature could have arisen from a combination of factors such as the association of the heavenly bodies (grahas) with the elements (pancha mahabhuta), guna, gana etc. as well as the traits of the deity they were associated with or seen as the abode of. The intrinsic parts often used in jyotisha such as the rashis, devtas, dashas, grahas, mahabhutas, bhavas etc. are so interwoven that it is extremely difficult to see them in their own distinct identity. It is for this reason that when I look at a Nakshatra, I simply cannot separate the Nakshatra in various parts like its guna, gender, nature, symbol or planetary ruler etc. My view of the Nakshatra is that it is a collective image of the aspects of an astral entity as well as of several astral entities such as the grahas influencing the Nakshatra.
This book is intended for all audiences, whether one is acquainted with Nakshatras or not. After reading this book, one will have a basic understanding of the generic traits of the 27 Nakshatras as well as their deities, symbols and planetary rulers. It does not specifically deal with the Nakshatra activation techniques but I have tried to include some basic activation techniques for the benefit of the readers. It describes the basic functioning of every Nakshatra including the mythological perspective as well as the esoteric.

The purpose of this book is to spread the basic knowledge of Nakshatras to even a layman who is unaware of its concept. The study of Nakshatras has enormous scope and its emphasis has not been fully uncovered in the mundane astrology by many. This book is also intended to expand the interest of the astrology enthusiasts towards the Nakshatras.

It has been such a stimulating journey for me to conduct an independent research on every Nakshatra and to bring out a novel way of presenting their power to the world. I hope you will enjoy reading this book as much as I enjoyed writing it!

Aman Bedi is an accomplished astrologer who has been working as a friend and guide for people who are interested in learning about their Karma and getting some direction for their life. In his words:

"The events which led to my exploring the varied dimensions of astrology make up a long journey. I believe that I was destined to learn this arena. But it was only after my predictions for friends and near ones and a few note worthies came true that I decided to follow my destiny as a profession. Since then, I have never looked back and in fact devoted myself extensively to the field. I have dedicated myself to reading birth charts and providing an insight into the life events through the study of Nakshatras.

In the past few years I have tried to explore life through Vedic Astrology, especially through Nakshatras and have found the logic and reasoning of many of my questions instilled long before our origin in the ancient texts and scriptures. My little learning into these have led me to believe that the answers are there but we just don’t know where to look! We need to look in the right place to get to the place that lord has intended for all of us. There is more to the hidden meaning behind this mystery, behind this Maya called “LIFE’, just a little exploration is needed, not outside though, it is needed ‘WITHIN’.

I have spent the last few years studying Vedic Astrology through self-study and through teachers who have motivated me to pursue this field and have supported me while I grew and continue to do so. I dedicate this book and all my knowledge foremost to my teachers and my fellow students who have equally contributed in my development in this field.

I have committed the last few years of my life towards learning the power of Nakshatras by merely observing the day to day events and occurrences in my life and in the lives of those around me. I have tried to connect as much as possible with the Mother Nature in understanding how everything entwines around her. In doing so, I have created many videos where I have tried to explain the sacred trees of Mother Nature associated with the Nakshatras.

I believe that I have a long way to go before I can call myself an astrologer and so I prefer a life coach or simply a friend. I do not even consider myself a teacher let alone a ‘GURU’. Some people start eulogizing one by this term very quickly without understanding the deep meaning behind this term. I also want to use this book as a means to bring forth the meaning of guru as defined in our texts and hope that we will all realize that in this age of Kaliyuga, ‘ WE’ ourselves are our first and foremost ‘GURU’."

The Rhythm in 27 Nakshatras- Poetry of the Cosmos.. A rhythmic revelation

Be the first one to write a review for the book The Rhythm in 27 Nakshatras- Poetry of the Cosmos.. A rhythmic revelation.

Other Books in Astrology

NUMEROLOGY FOR ALL
BALDEV BHATIA

WHY BEING NEGATIVE?
BALDEV BHATIA