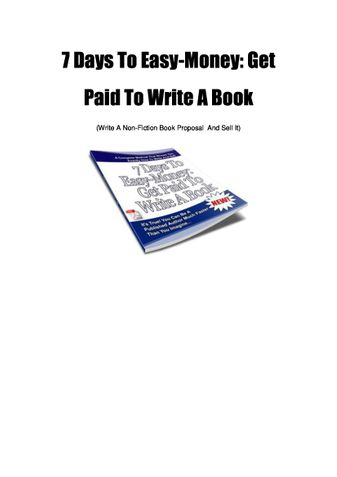 Would you like to GET PAID to write a book?

If you're thinking this is plain fantasy, think again. All professional writers get paid to write their books.

How? They sell their books via proposals before they write the books.

What’s a book proposal?
A book proposal is a document which convinces a publisher to buy your book before you've written it. Your proposal says, in effect: "Hey, I've got a great idea for a book which lots of people will want to buy. Do you want to publish it?"

Think of it as a combination brochure and outline of your proposed book.

You CAN sell your book the easy way --- sell a proposal
It's easily possible to make a fast $10,000, or even a six figure amount. You could even make seven figures --- over a million dollars for twenty pages of text.

It sounds incredible, but a fast seven figures is certainly possible if you have a HOT, hot idea or have had an experience that hundreds of thousands of people want to read about.

In his 2001 book about writing nonfiction, Damn! Why Didn't I Write That?, author Marc McCutcheon says that it's not hard to make a good income writing nonfiction: "you can learn the trade and begin making a respectable income much faster than most people think possible".

Do you need experience to sell a book on proposal?
No! You just need a good proposal. :-)

7 Days To Easy-Money: Get Paid To Write A Book by Angela Booth shows you how to go from idea to completed book proposal in seven short days.

Imagine --- in seven days, you could be sending your proposal to agents and editors!

The ebook includes everything you need to know. Just follow the easy steps. It even includes a sample proposal, which got a contract from an agent immediately it was sent out.

You can do it too!

Here's what you'll discover in 7 Days To Easy-Money: Get Paid To Write A Book by Angela Booth.

Be the first one to write a review for the book 7 Days to Earn Money.