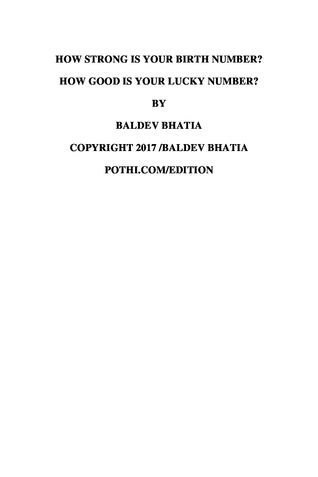 HOW STRONG IS YOUR BIRTH NUMBER (eBook)

HOW GOOD IS YOUR LUCKY NUMBER?

HOW STRONG IS YOUR BIRTH NUMBER?

HOW GOOD IS YOUR LUCKY NUMBER?

Astrology has stood the test of times ever since it revealed the mystery and the mastery of the ancient wisdom of forecasting the influence of the stars on human bodies. The author Baldev Bhatia a renowned and world famous astrologer has penned several simple books on astrology-this mysterious subject that reveals the true perception of knowing oneself through the art of prediction. Professionally the author has put his entire life experience in promoting Astrology in various fields with a view to serve the millions of curious readers of this mystic science and with the intension of imparting them the real knowledge of astrology through various marvellous scriptures. The Astrologer has been associated with astrology for the past forty five years and has been practicing astrology in various forms. The Author-cum Astrologer has been in touch with general public and has been practicing phycology and pubic healing. His intension is to guide his readers to achieve their personal goals with ease that would assist them to overcome all the problems, crises, speed breakers and the unforeseen negatives forces, in their lives so as not to get disheartened or depressed in their lives and finally lead a happy life and peaceful and a sweet life. The author also shares with millions of curious readers the ‘real knowledge’ by letting them know more about themselves in detail and also about their in born positive qualities, possessed by them and guides them to ward off the negativity in them, by getting to know as how to lead an happy and powerful life.. Without caring for the worries troubling them.
The negative forces influencing them, which needs to be discarded forever, for a sweet and happy living if the influence of the transiting planets. The main object of writing this manuscript is to impart the basic knowledge of how to become positive, bold, strong, courageous, and how to throw away the negative forces and become a happy person in life. The author also shares the valuable experience of his life with his readers through this valuable and helpful book. His published books “Microscopy of Astrology”, Microscopy of Numerology”, Microscopy of Remedies, Microscopy of Happy Living Microscopy of Positive Living and Microscopy of Positive Thinking also guide his readers to achieve their personal goals with ease and assists them to overcome all the problems, in their lives gracefully which guides them to lead a happy sweet and prosperous life. His readers have gained good experience going through his useful and purposeful books. His books have made his readers to feel secure, sound and have also encouraged them to face their destiny with immense strength and have also given them the power to face the challenges of this universe with utter confidence zeal and power and are leading a happy life. The author Baldev Bhatia leads way to happiness, success, positivity and advices his people suffering from depression and negativity in their personal lives to wake up and lead a positive and to be happy. After meeting hundreds and hundreds of depressed dejected disappointed and unhappy people from all over the world and people from all walks of life and he being a highly experienced astrologer and consultant in astrology and numerology felt it necessary to write books on Happiness, Love, and on the art of sweet living.
His books have also revealed to his readers to attain happiness in their lives so that they could easily achieve their path of glory and also be a brave strong and courageous human being. His books have given gracefully accepted by the people worldwide. His books have helped the masses to achieve and lead a life full of positivity, boldness, courage happiness and have generated confidence in depressed and dejected people. His books have helped his clients and readers to lead a good, a sweet and happy life. His books have been very different as they guide and help the readers to strengthen their will power and confidence which the readers have lost in today’s world. In order to encourage his readers and to help them, in all walks of life the esteem author decided to manuscript the following books in the interest and happiness of the universal world.
1.Microscopy of Astrology
2.Microscopy of Numerology
3.Microscopy of Remedies
4. Microscopy of Happy Living
5. Microscopy of Transiting Planets Vol 1, 2, 3, 4, and 5
6. Microscopy of Positive Living- An Art of Happy Living
7. Microscopy of Positive Thinking – An Art of Good Living

HOW STRONG IS YOUR BIRTH NUMBER

Be the first one to write a review for the book HOW STRONG IS YOUR BIRTH NUMBER.