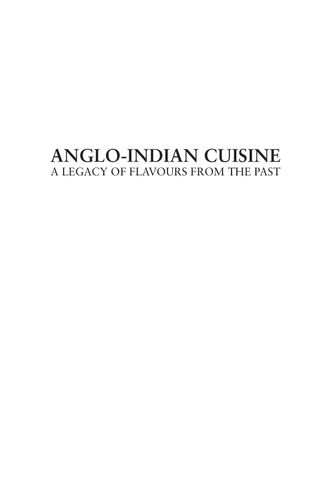 ANGLO-INDIAN CUISINE - A LEGACY OF FLAVOURS FROM THE PAST (eBook)

ANGLO-INDIAN CUISINE – A LEGACY OF FLAVOURS FROM THE PAST is a comprehensive and unique collection of easy- to- follow Recipes of popular and well loved Anglo-Indian dishes. The repertoire is rich and vast, ranging from the outright European Cutlets, Croquettes, pasties, roasts, etc, to mouth watering Curries, Side dishes, Spicy Fries, Foogaths, Biryani and Palaus, Pickles, Chutneys etc, picking up plenty of hybrids along the way. The very names of old time favorite dishes such as Yellow Coconut Rice and Mince Ball (Kofta) Curry, Pepper water, Mulligatawny Soup, Grandma’s Country Captain Chicken, Railway Mutton Curry, Dak Bungalow Curry, Crumb Chops, Ding Ding, Stews, Duck Buffat, Almorth, etc, which were so popular during the Raj Era are sure to bring back nostalgic and happy memories. These popular Anglo-Indian dishes will take you on an exotic nostalgic journey to Culinary Paradise.
It is a practical and easy guide to delectable cooking. The book with its clear step-by-step instructions, describes the preparation of a variety of Anglo-Indian Dishes. The easy-to-follow directions make cooking simple and problem- free.
ANGLO-INDIAN CUISINE – A LEGACY OF FLAVOURS FROM THE PAST is a revised version in a new format of Bridget White’s two earlier books “The Best of Anglo-Indian Cuisine - A Legacy” and “Flavours of the Past”. Lots of new recipes of popular Anglo-Indian dishes have been added in this edition.
Her other Recipe Books are; Anglo-Indian Delicacies, A Collection of Anglo-Indian Roasts, Casseroles and Bakes, The Anglo-Indian Festive Hamper, The Anglo-Indian Snack Box and Vegetarian Delicacies.

Bridget White-Kumar is a Cookery Book Author, Food Consultant and Culinary Historian. She has authored 7 Recipe books on Anglo-Indian Cuisine. Her area of expertise is in Colonial Anglo-Indian Food and she has gone through a lot of effort in reviving the old forgotten dishes of the Colonial British Raj Era. Her 7 Recipe books are a means of preserving for posterity, the very authentic tastes and flavours of Colonial ‘Anglo’ India, besides recording for future generations, the unique heritage of the pioneers of Anglo-Indian Cuisine.
Her Recipe book ANGLO-INDIAN CUISINE – A LEGACY OF FLAVOURS FROM THE PAST that was published in India, was recently selected as ‘Winner from India’ by GOURMAND INTERNATIONAL SPAIN, Under the Category: ‘BEST CULINARY HISTORY BOOK’. This prestigious Award is ‘THE OSCARS’ for Cook book writers. Awards are given every year for various categories and genres ie for Cook Book Authors, Cook Books, Chefs, Wine makers, etc. who compete from all over the world.
Bridget is also an Independent Freelance Consultant on Food Related matters. She has assisted many Restaurants, Hotels and Clubs in Bangalore and elsewhere with her knowledge of Colonial Anglo-Indian Food besides helping them to revamp and reinvent their Menus by introducing new dishes which are a combination of both Continental and Anglo-Indian. Many of them are now following the Recipes and guidance given by her and the dishes are enjoyed by both Indian and Foreign Guests.
Bridget also conducts Cooking Demonstrations and Workshops at various places across the country such as Clubs, Restaurants, Women’s Groups, Corporate Offices, etc. She is always ready to share and talk about Recipes and Food.
She can be contacted on +919845571254
Email bridgetkumar@yahoo.com
www.bridget-white-kumar.com
www.anglo-indianfood.com

ANGLO-INDIAN CUISINE - A LEGACY OF FLAVOURS FROM THE PAST

Be the first one to write a review for the book ANGLO-INDIAN CUISINE - A LEGACY OF FLAVOURS FROM THE PAST.

Other Books in Diet & Health, Cooking