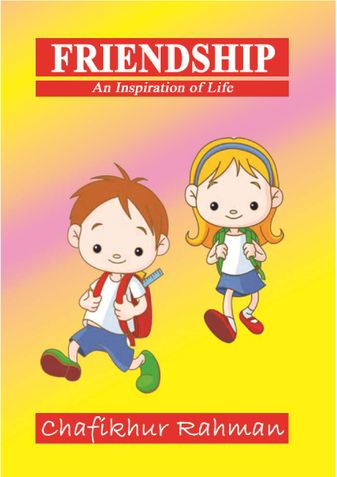 An Inspiration of Life

An urge to write from childhood one day looks for showing his creativity to the world. Here lies the motivating factor for the publishing of FRIENDSHIP by Chafikhur Rahman. Being in a service where only figures and numerical matters, Chafikhur has another self to relate his experience through the articulation of his feelings and acquaintances.

FRIENDSHIP exemplifies a positive approach to life. Friends in need are friends indeed. The mental health that is constructed with the aid of friends’ plays a major role in the struggle of life. The author reassures the bonding through his colourful presentation of the story.

FRIENDSHIP offers a fresh, distinctive and naively written saga of fond memories. The author’s deductive note is half hidden; those who feel are doubly entertained.

The author Chafikhur Rahman was born on 3rd February, 1986 at village - Nazirakhat, P.O. - Tepesia, District- Kamrup (Metro), Assam, India, Pin 782402. His parents are Abdul Malik and Nilima Khatun. Mainul Ali and Aifun Nasa Begum are brother and sister. He married to Rumani Islam on 12th May, 2013.

He completed his primary education from Nazirakhat L. P. School. He passed HSLC in 2002 with 1st Division later in Mathematics. In 2004, he passed HS later in Economics and Logic & Philosophy & BA passed in 2nd Class with major in Economics in 2007 from Sonapur College. Then he went to Pune and MA completed from Poona College in 2009 with 1st Class with Distinction. He completed PGDCA in 2013.

He joined in Directorate of Census Operations, Assam as a Statistical Investigator and continuing it. Before this, he temporarily joined in Sonapur College to teach Economics in August – October’ 2009.

The author starts to write from Class VI. The 1st writing of the author was a short story ‘SOHAY’ (Help) which was published in the year 1999 in Assamese daily ‘DOINIK ASSAM’, when he was in Class VIII.

Be the first one to write a review for the book FRIENDSHIP.