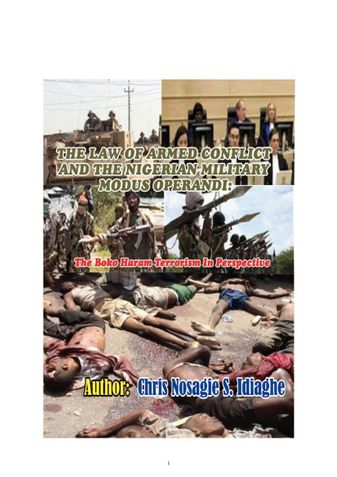 THE LAW OF ARMED CONFLICT AND THE NIGERIAN MILITARY MODUS OPERANDI: The Boko Haram Terrorism in Perspective. (eBook)

corruption, religious extremism, killings, kidnappings and the quest for power and control

This book provides researchers, students, military and security personnel, legal expert in both domestic and international criminal cases and the general public with an in-depth understanding of the main causes of Boko Haram terrorism in Nigeria, and why the terrorist group initially targeted Christians in the wake of their operations.

The readers will understand why some domestic and foreign ethnic and religious groups, including Al-Qaeda and Al-Shabaab gave Boko Haram the necessary material support such as weapons, monetary donations and monthly contributions from some northern Nigerian politicians to destabilised President Goodluck Jonathan administration in the years under review. The book also gave a vivid account about the capabilities and operations of the Nigerian military in comparison to the U.S and Israeli counter terrorism operations in Vietnam, Afghanistan, Iraq and the Gaza Strip. In addition, primary and secondary sources of evidence were provided to help readers grasp the main aim and objectives of the “Shura Council”, which is the grand strategic body that coordinates the Boko Haram terrorist attacks in Nigeria.
TABLE OF CONTENTS
CHAPTER FOUR
BACKGROUND TO THE STUDY AREA
4.1Overview--------
4.1.1Advent of Boko Haram------
4.1.2
4.2
4.2.1
4.2.2
4.3 Causes of Terrorism in the North East of Nigeria---
4.3.1Religious Extremism and Fundamentalism----
4.3.2Unemployment and Poverty-----
4.3.3Corruption and Illiteracy-------
4.4Tactical Onslaught of Boko Haram Terrorism in the
North East of Nigeria-------
4.4.1Suicide Bombing/Propaganda----
4.4.2Hit and Run Tactics / Ambush------
4.4.3Abduction / Kidnapping-------
4.5 Nigerian Military Modus Operandi in Counter
Terrorism Operation in the North East of Nigeria---
4.5.1MNJTF Organisation Manoeuvrist Tactics in Guerilla
Operation---------
4.5.2MNJTF Defence and Stability Operation (Complex Battle
Position)---------
4.5.3MNJTF Offensive Operation against Boko Haram---
4.6International Humanitarian Law and Counter Terrorism in the
North East of Nigeria-------
4.6.1Nigerian Military Counter Terrorism operation and
International Humanitarian Law-----
4.6.2Boko Haram Terrorism and International Humanitarian
Law---------
4.7Critique of the Nigerian Military Modus Operandi in
Combating Terrorism in the North East of Nigeria----
4.7.1Ground Forces--------
4.7.2Air Power--------
4.7.3The Rules of Engagement under the Law of Armed Conflict
and Modus Operandi of Special Forces----
4.7.4Intelligence Warfare------
4.7.5Military Technology and Special Forces Operations--
4.7.6. Nigerian Military Equipment.

Chris Nosagie Solomon Idiaghe is a ‘Counter-Terrorist and Explosive Ordnance Combatant’ with the Nigerian Defence, and a “Member of Course 1, Counter-Terrorism and Irregular Warfare” from the Nigerian Army Peace Keeping Centre Jaji, Kaduna.
Over the years, he has contributed extensively to the field of International Criminal Law, Defence and Strategic Studies. Presently, he is engaged in a doctoral research in “Law and Policy”.
Please, for comments and contributions, you can reach the author through-chrisidiaghe1@gmail.com

THE LAW OF ARMED CONFLICT AND THE NIGERIAN MILITARY MODUS OPERANDI: The Boko Haram Terrorism in Perspective.

Be the first one to write a review for the book THE LAW OF ARMED CONFLICT AND THE NIGERIAN MILITARY MODUS OPERANDI: The Boko Haram Terrorism in Perspective..