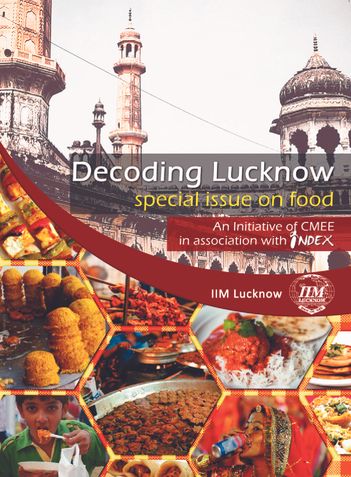 An Initiative of CMEE in association with INDEX

The attempt made in this book is one small step in the quest of understanding consumers of Lucknow in the INDEX fair (held annually by students of IIM Lucknow) attended by mostly upper end Lucknow consumers. The study also goes into detailed understanding of what Lucknowites think of their food and what food item(s) they consume at various occasions.

The book has been organized into three sections. Section one is divided into three parts. Part one - Eating at Home - covers all the occasions when food is consumed at home. Part two - Eating out of Home - covers all eating occasions where food is prepared and consumed outside of home such as visiting restaurants, food courts, coffee shops, etc. Part three - Beverage Consumption - covers beverage consumptions both inside and outside the home. Beverage is done in a separate part as it is a pretty big category in itself, and is consumed in various forms at various times, and on various occasions. The research methodology for this work has been a combination of both qualitative and quantitative. An overall sample of 304 respondents is used in the quantitative study that is more or less divided equally among - eating at home (100), eating out of home (105), and beverages (99). For the qualitative study the total sample size was 62 - eating at home (22), eating out of home (19), and beverages (21).

Section two illustrates how putting consumers in a game-like mindset can produce richer insights on their consumption patterns, and drive new idea generation about the market.

Lastly, Reference Tables of section one are provided in section three.

The Centre for Marketing in Emerging Economies (CMEE) at IIM Lucknow aims to be a globally recognized centre of excellence for pursuing original research and imparting quality education in the area of marketing, with a specific mandate to contribute towards better understanding of emerging economy markets and challenges therein for marketing practitioners.

Be the first one to write a review for the book DECODING LUCKNOW - special issue on food.

Journal for Studies in Management and Planning, July ...
JSMaP