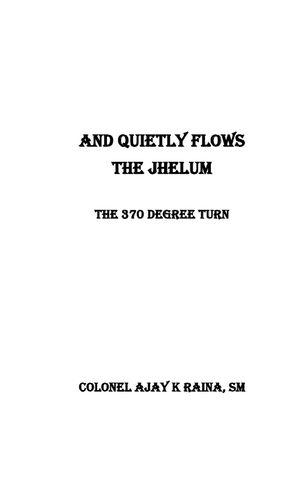 And Quietly Flows The Jhelum (eBook)

A riveting action-packed account of intrigue, behind the scene labour, dirty games and everything else that concerns the Valley

The proverbial crown often makes the head uncomfortable and if such a crown is crafted by quisling apostates, adept at coercing the head to force the whole body to twitch, the matter becomes a bit too serious. Kashmir, the crown of India, has been manipulated by many such shrewd individuals for too long, causing excruciating pain and agony to many. But every suffering, like every joy, does end at some point of time!
Electoral promises, being what these are, have always been short-lived in the biggest democracy of the world. Common people, the key stakeholders, have got used to such a phenomenon. The troublesome neighbour is not too far behind; he is used to typical tolerant reactions to one and many of a thousand cuts that he keeps inflicting on his big neighbour every now and then.
The usual script, however, changes one fine day and a subtle change begins to happen. Those who observe things closely, notice the change while many others just brush them aside, calling such changes nothing but flashes in a hot cast iron pan.
And then the truth reveals itself – absolutely naked and stark- beyond doubt and impossible to ignore! Yes, a lot goes into running a country; no different than an iceberg, only tip is visible and yet a lot sails underneath. There are institutions and then there are agencies. Beyond visible, there are many entities who work 24x7 and remain obscure and unsung! Yes, it takes a lot to run a nation!

An avid writer, the author is a military veteran

And Quietly Flows The Jhelum

Be the first one to write a review for the book And Quietly Flows The Jhelum.