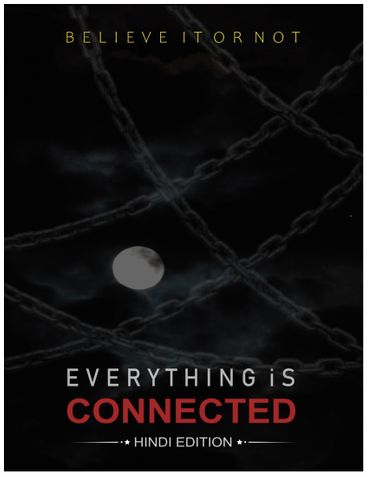 Believe it or Not: Everything is Connected (eBook)

Till a few years ago, I also used to think like an ordinary person, accepting what the media told in one go. If someone was told wrong, I used to believe at once, in the same way, if someone was told right, then he would become an inspiration, whether he was a politician, actor, or an entrepreneur. I was not aware, but I definitely felt that after all there is something wrong, somewhere something wrong is happening, which is out of our sight. But the wheel of time kept rolling, and my ability to understand right and wrong grew. Now I have stopped believing anything, just because of what someone says.

Then to understand more deeply about all these things, started reading about them, which increased my critical thinking ability. This benefited me in such a way that I was now able to find the connection between things. Now that the reality was in front of my eyes, I started discussing it with my near and dear ones, so that they too could know about it. In which except for a few people, most people used to ignore it. In the eyes of some, I had become a conspiracy theorist and was spreading false propaganda. Although those people never said such a thing to my face, their words were understandable. At the same time, some people who knew a little bit about this, those people kept my side.

I had a lot of discussions with the people about the coronavirus and the vaccine as well, in which I tried to explain to them, how a conspiracy is being made to control the whole world. However, according to him, this pandemic has been brought to earn money. I kept on explaining to them that this was not done just for business, but there are bigger motives hidden in it, you must try to connect the dots. Although I kept saying that everything is connected, you guys try to connect the dots, but here I was making a big mistake, I was not even telling which are the dots that have to be connected.

After the new WhatsApp policy came out in 2021, I got a lot of appreciation when I wrote an article to make people understand digital privacy. From here I got the motivation that I can explain to people through my pen. So I started writing an article to explain this, but there came a time when I felt that this article would be too long, so I tried to put it in the form of a book.

I wanted to write a lot, but I had to wrap this book in a very short summary due to a paucity of time. Although in this book I have written so much that any person can easily connect the dots. There is still a lot to write, which I will definitely (i.A.) write in the coming time in this book. After reading this book, I hope that critical thinking will be born in you too, and you too will not believe anything just by listening.

Believe it or Not: Everything is Connected

Be the first one to write a review for the book Believe it or Not: Everything is Connected.