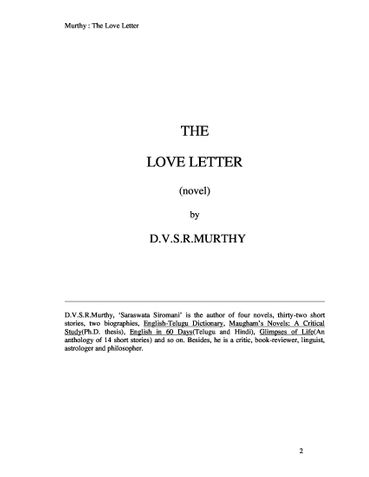 The Love Letter portrays the quest for happiness. It’s universal.

The novel takes off, when Kalpana hands over a love letter to the Cap. Raja, the protagonist of the Love Letter. His love fails after the birth of his second son. He resigns his commission under pressure, and accepts the job of an executive in Hyderabad to be happy. But his family falls apart.

After tribulations he is the assistant secretary of the paper mill in Rajavaram. There he tries to be happy with friends, but is caught in troubles.
Then he’s led to St. Satyananda. The saint initiates him into meditation and pranayama. He stops looking at and starts looking into. How he gains inner power, and how everything falls in its place in his life makes the novel a page turner.

The main characters are archetypal, and give an insight into life. Raja is sensual, Rani, hedonistic, Kalpana, pragmatic, and so on. St. Satyananda raises the level of the novel with Indian mysticism. The relationships intrigue, and leave a message that they do not endure without an element of selflessness. The protagonist proves to the hilt that hankering for sensual pleasure produces pain ultimately, and an individual is no other than God, jivo Brahmaiva naparah.

The Love Letter is an allegory, and it caters to all kinds of readers. Any reader just turns the pages to know what leads to the love letter. Above all The Love Letter is the protagonist’s journey from darkness to light, thamasoma jyothir gamayah.

D.V.S.R. Murthy is Saraswata Siromani, a novelist, short story writer, biographer, critic, linguist, lexicographer, book-reviewer, radio talker, and so on. 23 books stand to his credit. He taught English language and literature to the students of the degree classes in Andhra Pradesh for more than three decades before he had settled down as an advocate.

His literary career took off as a critic. 22 articles on literary, political and other subjects were published in almost all leading journals of India. His first Telugu story, Velugubata, glowing darkness, was selected by a leading weekly in 1979 in a competition. He wrote 39 short stories till now. Four of them won awards of Rs.1500/-, Rs.1000/-, Rs.500/-and Rs.400/-in various competitions.

Murthy wrote the biographies of Mahatma Gandhi (1967) and Gopalakrisna Gokhale(1969). His popular work is English in 60 Days (1986) in Telugu and Hindi. Maugham's Novels: A Critical Study (1991) is his research work for a Ph.D. A Manual of History of English-Language and A Handbook of Literary Forms (1991) are in great demand by college students all over India.
His forte is creativity. He wrote four Telugu novels, and one of them was serialized in a leading weekly in 1979. It was selected in a competition for novels, and it stood 8 in more than 100. Reviewing his second novel in a weekly, D.K. said, 'Undoubtedly a great novelist is born.' His four Telugu novels and thirty-nine short stories carved out a niche for him as a creative writer. The Love Letter is his debut novel in English. He completed the first draft of another novel, Trinity, a treatise on marriage, that’s triune.

Be the first one to write a review for the book The Love Letter.