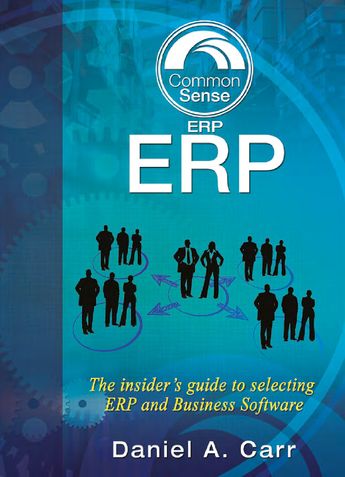 The insider's guide to selecting ERP and Business Software

An ERP Ebook for small business, ERP accounting and ERP business solution written by Daniel Carr. It is a complete ERP selection guide. It will give you a well rounded understanding of the software industry and then provide you with the tools to understand your business needs and how to go about the selection process. Written by an ERP master in simple business language, the book provides:
•Examples and knowledge of how to “Process Map” your business
•How to determine your budget
•Where to look for the right system
•How not to waste time looking at systems you can’t afford
•Complete forms and scoresheets to analyze systems and vendors
•How to write an RFP
•When and where to negotiate (and when not to)
•How to make the decision of On-premise vs. Cloud based systems
www.commonsenseerp.com

Daniel has spent over 30 years in the ERP industry and has overseen over 2000 ERP implementations.
At 22 years of age, Dan started his career in ERP sales and quickly purchased his first company which developed and sold ERP software for manufacturing companies. Within a few short years Dan became an Industry leader and founder of various companies both within and external to the software industry.

While primarily based in ERP software, Dan’s career was enhanced by holding founding positions and C-Level roles in companies ranging from startups up to nearly a billion dollars in sales. His involvement has been in virtually every aspect of company life cycles and his experiences include not only ERP software but accounting, manufacturing controls, distribution, warehouse design and management, human resources, CRM and much more. After selling his primary company in 2007, Dan quickly grew a consulting practice helping companies to improve their value and bottom line by assisting in the process of ERP software selection and implementation. Leaning on a rich career in the ERP software industry, he quickly developed the principles and methods found in Common Sense ERP And assisted many companies in successful ERP selections.

After a long and successful career watching the ERP software industry grow and change, I have long wanted to teach others what I knew about the industry. Unfortunately, the ERP industry has been characterized by an elitist crowd of people who have overpriced and imposed a certain arrogance on buyers of ERP software. I want to change that because ERP systems are essential to the long term success and value of a company and I plan to transfer the upper hand to the buyer, and not the seller.: By Daniel Carr.

Dan continues to consult within the ERP industry as well as performing other forms of business consulting. He is now working on his second book – Common Sense Business and continues to make investments in the technology field. Dan resides in Michigan where he has been a business and community leader for many years.

Be the first one to write a review for the book Common Sense ERP.

Journal for Studies in Management and Planning, March ...
jsmap