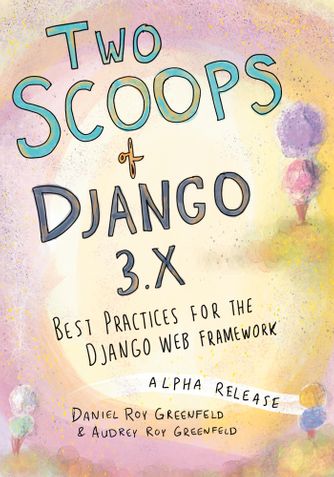 Once again, we're releasing a book chock-full of material that will help you with your Django projects!

In Two Scoops of Django we introduce you to various tips, tricks, patterns, code snippets, and techniques that we’ve picked up over the years. Two Scoops of Django is NOT a tutorial for beginners just starting out. Rather, it is meant for people who are at least building their first project.

If you want a Django tutorial, please consider our "Django Crash Course" book instead. That is a guided walkthrough where we build a real, production-quality Django web application from the ground up. Designed to build solid foundations with Django fast, it's the perfect book for getting ready for the more advanced content in Two Scoops of Django.

This book is an update and expansion of previous editions:

- Updated for Django 3.x (which will be maintained by the core team until at least April 2024!)
- Updated to match changes in the Django ecosystem, with corrections and clarifications added thanks to the feedback of our readers and technical reviewers.
- Updated for Python 3.8 and/or 3.9
- Revised material on nearly every topic within the book.
- New material on GraphQL, Django REST Framework, security, forms, models, and more.
- Sold just as PDF right now, e-pub will come later.
- Two Scoops of Django 3.x: Best Practices for the Django Web Framework is available in PDF now, Kindle, ePub, and print formats later. The paperback will also be made available on Amazon and Flipkart.

Until finished, this e-book will be updated periodically.

Daniel and Audrey Feldroy nee Roy Greenfeld are long-time authors. They are also experienced software engineers each with decades of programming experience at MIT, NASA, Microsoft, SharpCast, Octopus Energy, and more. In 2018 they were given the Frank Willison Community Award for their contributions to the Python programming language. In addition to writing Two Scoops of Django, they are avid open source contributors. Audrey's father is from Kolkata, India. They have a 2.5 year old daughter named Uma.

Be the first one to write a review for the book Two Scoops of Django 3.x.