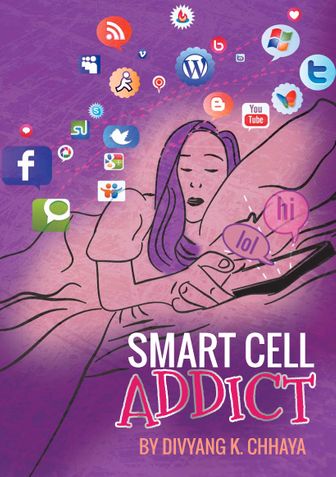 My work Smart Cell Addict is a ‘prose poem’ dealing with cell phone use versus overuse dilemma touching basic element human survival need versus desire.
Desire to own the latest expensive smart phone is highlighted with its social, financial and health related ill effects that include a new social menace and modern spying device.

Cell phone helps in many ways when urgent communication is the dire need of a ship in distress, communication by explorers and those on the move, and for medical emergencies. At the same time, cell overuse has caused many untold and unimagined social problems. I feel that modern electronic devices were originally meant for military or corporate communications. These are now commercialized and used or misused by unaware commoners not having the capacity to grasp end consequences of such use or overuse when a poor commoner fuels his desire to sound modern.

Every coin has two sides. We are generally used to see only one side of our routine life. A cool bystander can see both sides of your coin-of-life. It is generally too late by the time we realize factual other side of our life in case of addictive cell phone overuse. In the 1990s I had seen the craze build-up for Cordless wired telephones, Answering Machines attached to landline telephones, walkie-talkie, Pagers, Palm Held Computers, Digital Diaries, DictaPhone, convenient MiniTape Recorders for journalists, travelogue encounter writers, and civil lawyers used to dictate to a stenographer, and so on. But these did not radiate microwaves as the present day cell phone.

Cell-users fail to understand that there is no need to send photograph of grandchildren in USA to their old Grandpa in Goa five times a day and increase ill effects of radiation. They see that wordsap is free and facebook is free so why not use it. However, no one notices ill effects of “Free” themes of buy one get one free. In any case, they all pay for the internet services.
You have to have internet connection to be able to use these “Free” offers. The owners of such “Free” website or computer-aided and mobile application companies earn by way of advertisements and such other data-collection ways of business-intelligence that are not yet known to commoners. The hoi polloi also may not be aware as to how they are contributing in making few persons richer by billions of US Dollars each year by spending endlessly on mobile devices, services charges for wireless-telephony and internet connection.

Level of sabotage can be seen in developing countries when one notices schools, colleges, banks, and even the government FORMS compulsively demand “Your Cell Phone Number.”
Many offices do not accept the application if landline telephone number is given. If the applicant says, “I do not own a cell phone” he is told to give the number of any other family member, but give a cell phone number to enter your data in-the FORM for saving it on the digital records. Which means every family is compulsively bound to own a cell phone instrument, and pay for its usage charge.

It is only through poor commoners that businesspersons can become rich. A truly rich will never prefer debts that he cannot repay by auctioning his factory and available assets. He would prefer life without hassles. What is the use of money if it brings more trouble? But a commoner will try to prove that he is also no less than other “high flyers” known to him and will incur debts to buy iPhone, or such other prestigious social image enhancing gadget.

This Prose Poem touches psychological aspects of commoners that have invariably contributed in bringing riches for the stylish makers of items of desire. This prose-poem does not touch those who become rich by governmental favors, like those selling Petrol. Price hike nets in more money for the seller when he sells a country’s natural resource that is free for him under BOMT scheme of privatization of government’s public utilities.

This poem touches tendencies and end consequences that can be faced by reckless commoners. This poem does not talk about the very rich and the very poor commoners. It talks only about the middle class that is eligible to avail loans from banks or private sources for display of wealth that they past one hundred generations never had. It highlights the erroneous competition mode or a march towards the wrong competitive spirit.

Apart from ill effects of overuse of cell phone and ill effects of microwave radiation all over, this ‘Prose-Poem’ touches various general aspects applicable only to all developing countries regarding politics, governance policies and MNC interference in not-so-rich host country that could lead to ultimate takeover of major assets of the host country or pushing the rapidly modernizing nation in a debt ridden state. MNC’s competitive advantage wins in the end in a country where new wealth is not generated and the same wealth is redistributed to show satisfactory figures to unaware public voters.

Reckless spending by sole wage earners continues to plague the nation where wealth is unevenly distributed. Few take disadvantage of modernization craze when small businesses gradually die out being unable to compete with giant MNCs.

This prose poem contains imaginary and fictionalized new concept of “tax paid white money” that has the same effect as black money. I have fictionalized how old method of bribe taking has changed in present day world and evolved into a new devilish shape to hoodwink anticorruption laws in modern era of ‘new capitalism.’’ It is a modern method of creating ‘tax paid wealth’ converting bribe money into legal and official earning (Until mens rea is attached to methods of earning despite very serious problem of proof).

Something that is bad will always remain bad. But in homeopathy they use poisons to cure many illnesses caused by intake of same type of toxic substance. The quantity in homeopathic dose is untraceably small. Maybe Similia Similibus Curentur cannot apply to the damage caused by microwaves.

Writer is a practicing advocate enrolled with the Bar Council of Delhi w.e.f. His area of law practice continues to be Delhi and non-litigation law practice at Ahmadabad.

Be the first one to write a review for the book Smart Cell Addict.

WHY DO HAVE TO WORRY SO MUCH?
BALDEV BHATIA