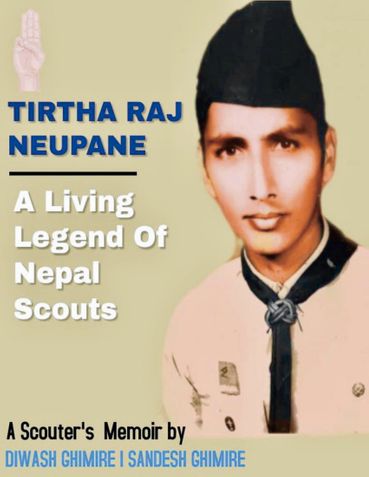 This book is dedicated to honourable TIRTHA RAJ NEUPANE for his 50 years of Scouting.

Diwash Ghimire  Born: 14 December 1988 is an entrepreneur, poet, writer, social activist, educationist and peace messenger. Diwash Ghimire was born in Nepal. His father came from Burma and settled down in Nepal in the 70s. He started his schooling in Nepal then higher study in England and India. He has visited many countries like England, Japan, Myanmar and India. He is a life member of ARTDO international.

Sandesh Ghimire is an entrepreneur, engineer, Author and poet from Nepal. As a Author and Poet, he has written articles for several international publications including Srujan Panicle (India), Kametsa magazine (Peru), Homo Universalis magazine (Greece), Literary Portal (Balkan), ATUNIS magazine (Albania), Silk Road International Poetry Festival (China), POETRYZINE magazine, Enheduana's literary garden and The Poet magazine (England). His recently published book is titled Peace and Harmony, which is available in world wide stores.His books “ The Universe” and “Sujata: Rise of the Tycoon” will be in stores worldwide soon. He has served as the chartered member of Chitwan Central Leo & Lions Club, International Coordinator of ScienceForum, International Coordinator of Srujanothsava, Coordinator of National Service Scheme( NSS). He is a life member of ARTDO International. He is also the Peace ambassador for Nepal to Iqra foundation and is currently an official convenor for the Kalika School International Advisory Board.

Be the first one to write a review for the book TIRTHA RAJ NEUPANE : A Living Legend of Nepal Scouts.