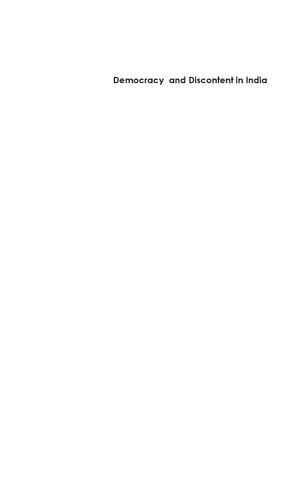 Democracy and Discontent in India (eBook)

With the beginning of the civilizations, the democracy has been considered the best form of government in the political system. However, it is being misused, abused and used for the benefit of some power seekwers in all over the world and more particularly in India. As India being the land of the diverse communities, races and religion, the political parties and the government mostly misused the democratic machinery. In this book, the beginning and development of the democratic system, and the policies of the Congress and Bhartiya Janta Party under their respected leaders, has been fully analysed. The communal riots, mob lynching, organized hate crime, terrorism and corruption, etc. has also been discussed in this book. This book is intended to aware the people for the nationalism and patriotism and hate the divisive forces which are maligning the secular and democratic character, and rainbow culture of India.

Dr. Aijaz Ahmad was born on 16th August, 1969 at Motipur village in Sant Kabir Nagar district of Uttar Pradesh. After completing his early education in Motipur, Santha, and Basti, he joined the Aligarh Muslim University in 1985 and completed B.A. (Hons), M.A., M.Phil., in History. He also qualified NET and JRF test conducted by University Grants Commission. In 2000, he obtained the Ph.D degree from Jamia Millia Islamia, New Delhi in Modern Indian History. In 1994, he was appointed as a lecturer in History in YMD College Nuh affiliated to the Maharshi Dayanand University, Rohtak. In 2004, he was promoted to Associate Professor in the same college. During his service career, he attended many national and international conferences and got published 11 research papers. In the same period Dr. Ahmad got published eight books by different reputed publications. The published books are: 1. Indian Muslims Against British Rule, 2. Sir Syed, Aligarh Muslim University and National Politics, 3. Mewati Rebellion of 1857, 4. Uprising of 1857, 5. History of Mewat, 6. Cultural Heritage of Mewat, 7. Haryana Ka Itihaas, 8. Poorv Aupniveshik Bharat Me Vigyaan Tatha Praudyogiki, 9. Triple Talaq. This work ‘Democracy and Discontent in India’ is the tenth book of Dr. Ahmad.

Democracy and Discontent in India

Be the first one to write a review for the book Democracy and Discontent in India.

A VISIT TO DHOLAVIRA
D BHATTACHARYA