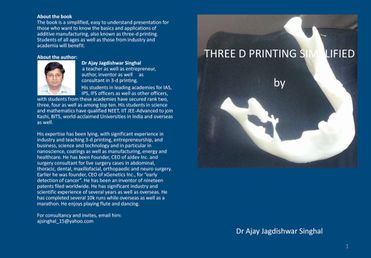 The book is a simplified, easy to understand presentation for
those who want to know the basics and applications of
additive manufacturing, also known as three-d printing.
Students of all ages as well as those from industry and
academia will benefit.

Dr Ajay Jagdishwar Singhal has been a teacher as well as entrepreneur, author, inventor as well as consultant in 3-d printing.

His students in leading academies for IAS, IPS, IFS officers as well as other officers,
with students from these academies have secured rank two, three, four as well as among top ten in year 2016, 2017. His students in science and mathematics have qualified NEET, IIT JEE-Advanced to join Kashi, BITS, world-acclaimed Universities in India and overseas as well in year 2016, 2017.

His expertise has been lying, with significant experience in
industry and teaching 3-d printing, entrepreneurship, and
business, science and technology and in particular in
nanoscience, coatings as well as manufacturing, energy and
healthcare. He has been Founder, CEO of aJdev Inc. and
surgery consultant for live surgery cases in abdominal,
thoracic, dental, maxillofacial, orthopaedic and neuro surgery.
Earlier he was founder, CEO of xGenetics Inc., for “early
detection of cancer”. He has been an inventor of nineteen
patents filed worldwide. He has significant industry and
scientific experience of several years as well as overseas. He
has completed several 10k runs while overseas as well as a
marathon. He enjoys playing flute and dancing.

For consultancy and invites, email him:
ajsinghal_15@yahoo.com

Showing 1 out of 1
ajsinghal 3 years, 7 months ago

- an easy to read eBook on three d printing
- addresses students of all ages
- in presentation format
- presenting the author's experiences in live surgery
and healthcare cases
- presented in a way an adult can explain to children
- outlining with introduction to type of three d printers, types of raw materials, concluding with applied 3-d printing
- author's first book on three d printing for 'dummies'
- leveraging author's years of experience from the industry and
teaching real world methods to the author's students

Other Books in Medicine & Science, Engineering