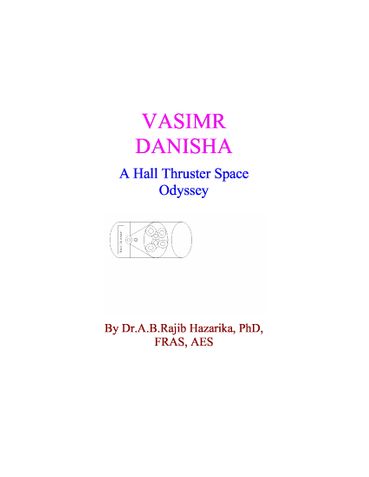 The book is on the space craft technology a hall thruster named VASIMR DANISHA which can travel for 56000 hours .Theory and its applications are discussed.

Besides being in teaching side by side research is also going on for last 14 years .I started my research work as a Junior research fellow (UGC,NET) under the guidance of Prof(Dr) P K Bhatia, DSc, FNASc, FRAS(Lond.),FIMA(UK),MIAU(Lond),Former Dean, Faculty of Science, Former Prof and Head, Dept. of Mathematics and Statistics, J N Vyas University, Jodhpur, Rajasthan on 11th May 1993 ,during that I used to teach as JRF(UGC,NET) in the K N college for Women, Jodhpur and also used to do my research work .I completed in total 7(seven) papers for my PhD thesis entitled “Some problems of plasma instabilities in partially ionized and fully ionized plasmas” which was submitted to Dept. of Mathematics and Statistics, J N Vyas University, Jodhpur, Raj. on 27th Dec 1995.From the thesis two of the papers are published in internationally reputed journal Physica Scripta published from Royal Swedish Academy of Sciences, Stockholm, Sweden viz., P K Bhatia and A B Rajib Hazarika(1995)Phys Scr 51,775 & P K Bhatia and A B Rajib Hazarika(1996) Phys Scr 53,57 which is a fundamental paper in the field of space plasma it gives some idea about the size when the stars will burst which came out to be true for binary stars as well as for neutron stars giving new limit known as Bhatia –Hazarika limit. Bhatia P K and Hazarika A B Rajib: J Indian Acad. Math. 29 (1), 141. And many of papers remain unpublished from the thesis. In the mean time Senior Research Fellowship (UGC, NET) was awarded on 12th May 1995.After completing PhD in Mathematics I joined Plasmas Physics Division, Institute of Advanced Study in Science & Technology, Guwahati as Research Associate (DST) in the project Development of plasma physics division being given work of developing the theoretical models for sheath instabilities which was thrusted upon by Dept. of Science and Technology (DST) , Govt. of India. I have two models for sheath i.e. Sheath Criterion for Bhom Chodura collisional magnetized sheath which is in annual report as well as was presented in 14th National Symposium of plasma science and technology, Amritsar (1999).Based on which research scholars did the experiment to check the results proved to be correct is available in annual report of IASST (1999) & in technical report IASST/98/29. One paper on BETA machine was also done and was presented in 13th National symposium of plasma science &technology (1998,2001) in oral session which was based on the stabilization process of Rayleigh –Taylor instabilities in BETA machine as theory as well as simulation code is available as technical report IASST/98/23and in annual report of IASST(1998) which contains two more paper on Rayleigh-Taylor instability in stratified polytrophic medium, another one Jhonson’s criterion of superposed fluids, Kelvin –Helmholtz instability in collisional polytrophic medium. A new type simulation code was developed for BETA machine using Fuzzy Differential Inclusion(FDI) which was presented in 15th National symposium of plasma science and technology, (2002,2003)using source ionization another with thermal diffusion. Two new type of future fusion devices were conceptualized theoretically namely Double Tokomak Collider(DTC) and Magnetic Confinement Tokomak Collider(MCTC) for which patent is applied for in US patents and trademarks office on 12th jun 2008 and paper related to above said devices were presented in 19th, 21st National Symposium of plasma science and technology,(2005,2007) and got accepted for publication in 3rd Technical meeting of IAEA on theory of plasma instabilities, York(UK).These two future fusion devices gives application wise in generation of electricity by using fusion and by hybrid technology. Application in the field of computers is making the microchip using nano technology. In space craft thrusters so far we that different types of thrusters are used by using plasma or electric ignition similarly I am planning to make new type of thrusters using the presently working three fusion devices and using hollow cathode thrusters, Hall thrusters and so on using different gases such as xenon and argon.
Most recently I have developed a new type of fusion device which may give more power than the earlier design known as Duo Triad Tokomak Collider (DTTC) which hopefully gives better thrust in space technology as well as in automobile industry. Very recently I have supervised two MPhil students who have completed it.
http://wpedia.goo.ne.jp/enwiki/User:Drabrh/Dr.A.B.Rajib_Hazarika
http://en.wikipedia.org/wiki/User:Rajah2770

Be the first one to write a review for the book VASIMR DANISHA:A HALL TRUSTER SPACE ODYSSEY.

THE RUNWAY SUITCASE AND OTHER STORIES
Sanjeev Kotnala