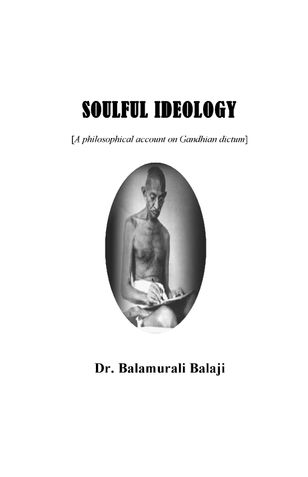 This book, “Soulful Ideology” is a small initiative towards finding a platform with a hope to understand Gandhi's principles by focusing on topics pertained to religion, humanity and path of nonviolence.

It is a continuance of my journey towards discovering the ideologies of Mahatma Gandhi. Whereas my earlier books explored how Gandhi's principles have a relevance to today's socio-political aspects, this volume is intended to discern his principles on a different perspective. It gives a precise account on the core aspects of his ideology. The objective is to promote Gandhian values and impart the proper understanding of core principles what Gandhi preached and practiced in his life. One could also find a philosophical Gandhi who saw human kind and moral livelihood as a matter of creed and way of life.

This edition of the book includes topics such as “Means and the Ends”, “The workings of human nature”, “Islam illustrated”, “Hinduism”, “Vows”, “Soul” and “Silence”. All these topics portray detailed revelations in the areas of religion, human character, nonviolent path to success and disciplinary aspects in carrying out one's life.

In this book I try to unearth the unexplored areas of philosophy and principles of Mahatma Gandhi that had never been discussed or wrote elaborately in the Gandhian literature. “Means and the Ends” enlightens the reader with not just the meaning of these terms but elicits the need for nonviolent means. “The workings of Human nature” explains how Gandhi's nonviolent struggle was carved out of people's intricate human nature of those days. “Islam illustrated” is an account of real conventions of Islam as a religion and how it has been terrorized in today's world. “Vows” discusses the importance of taking of vows in one's life and elaborate Gandhi's eleven vows for a better understanding of its purpose. “Hinduism” gives a precise account on Sanatana Dharma, a religion of mystic ideas and philosophical values. The topic “Soul” explores the aspect of the spiritual soul in Hindu context and how soul force by Gandhi worked out. “Silence” discovers the importance and effectiveness of being silent as it looks into Gandhi's observance of silence as a method for discipline and to avoid conflicts.

He has written hundreds of articles on Gandhian ideals and current day issues and is publishing “The Techno-Gandhian News”, a monthly online newsletter since July 2011.

He has produced “The Flashback”, a photo-documentary on the life of Gandhiji and hundreds of school students have watched this film during Gandhi Jayanti (2013) and “The story of Gandhi”, a comic book in the form of a software CD in various Indian languages. (2011-2015). He has authored two volumes of book titled “Gandhi Invoked” (2008 & 2010) and “Relevance of Gandhi: Ideas and Issues” (2017).

He is married and has a daughter, lives in Chennai, Tamilnadu.

Be the first one to write a review for the book Soulful Ideology.

Other Books in Self-Improvement, Philosophy

How to unleash your true potential
Shivam