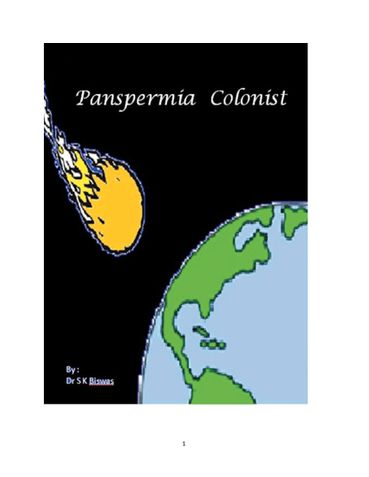 “When I look up at the night sky , I feel large , because I remind myself that not only we live inside this Universe but the Universe live inside us.” Neil de Grasse Tyson, an eminent American physicist said this in one of his interviews.
Did life come on earth from the outer space ?
Scientists are not sure , but they have one theory known as Panspermia, which explains how life came on earth from outer space.
Today homo sapiens are face to face with their ancestor microbes in an epic battle between brainy & brainless.
The microbes in this story, which move in millions and expands in exponential speed, want to colonize the solar system , to populate all the planets and moons including Earth. In the beginning , they had sent an advance team to Earth , to infect and inflict serious threat to mankind, but that mission was crushed by humans. Now Crutzfield, the supreme commander of the microbe brigade, nicknamed as Master, sets up a roadmap and begins a journey himself to colonize the whole solar system with a special attention to a beautiful blue planet , to settle a score with humanity.

In this Cosmic hitchhiking by microbes, plunging form one planet to other, the reader will witness amazing sights and events inside and outside the solar system, experience the thrill of a space tour packed with action and adventure and will be able to appreciate the dazzling diversity of our universe.
So, pick up this book, fasten your seatbelt –and enjoy your space tour…!

Dr ( Prof.) S k Biswas , a professor in a medical college, has passion for writing books on science fiction. During this current pandemic, he decided to write on Space adventure , and produced a fictional novel on microbial invasion of our solar system. Previous to this, he has also written and published another science fiction book on Covid virus invasion of our body( the inner micro-cosmos) in a fictional format.

Be the first one to write a review for the book PANSPERMIA COLONIST.

A Storm of Magic
Ashley Laino