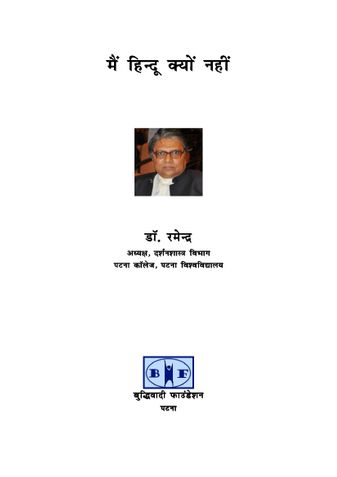 "Why I Am Not a Hindu" was first published in print edition in 1993 (second edition 1995). It has been translated into Hindi, Oriya and Malayalam.

The first Hindi print edition of 'Main Hindu Kyon Nahin' was published in 2001. This is first revised e-book edition of the book (2014).

Dr. Ramendra (full name "Ramendra Nath") is presently working as Associate Professor and Head of the Department of Philosophy at Patna College, Patna University, India; where he has been teaching for more than thirty years. He is a double gold medalist and double research degree holder from Patna University. His Ph. D was on "The Ethical Philosophy of Bertrand Russell" and his D. Lit. Was on "M. N. Roy's New Humanism and Materialism". Both these works have been published as books. Dr. Ramendra is the author of nearly thirty books and booklets in Hindi and English, including 'Why I am Not a Hindu', 'Is God Dead?', 'The Myth of Unity of all Religions' and 'Some Reflections on Ethics'. Besides, he has written hundreds of articles in newspapers, magazines and journals. His Hindi books include ' Andhwishvas ke Virudh', ' Kya Ishwar mar chuka hai?' and 'Main Buddhiwadi Kaise bana'. He has also written text-books in Hindi on Social-Political Philosophy and Philosophy of Religion.

Be the first one to write a review for the book Main Hindu Kyon Nahin.