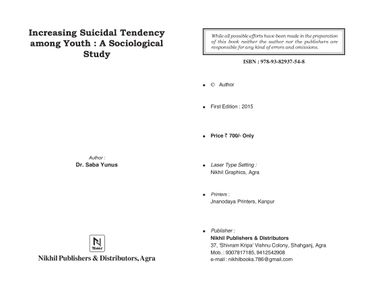 This book titled “Incresing suicidal tendency among youth” is a research study of 300 school going kids of Kanpur city.

The World Health Organization noted that someone commits suicide every 39 seconds thus making it one of the leading causes of death in the world. There are an estimated 10 to 20 million non-fatal attempted suicides every year.
In India, the problem of youth suicide has gradually worsened since 1960. Suicide is the
2nd leading cause of death among teenagers today!!
The rate for boys was 58 per 100,000, and for girls it was 150 per 100,000. The rates are so high that if this happened with a disease, you would actually conclude that something has to be done immediately.
My own thinking is that girls commit suicide more frequently because this is a manifestation of what we call the gender bias against the girl child in Indian culture and Indian society. They are driven to it when families fight, or they fail in the exams, or if they cannot fulfill their love life, or sometimes when the girls feel they are a financial burden.
In India, they [suicidal girls] use hanging or take pesticide. The girls also burn themselves, generally they use more effective methods.

With increase in young girl suicide rates in Kanpur city, there is an immediate need to address academic, emotional and psychological attributing factors faced by the girls. Accordingly there is a need to establish and enhance a professional counseling service programme.

Recognizing the need for the detailed study on this topic at Kanpur level, I have collected data from 300 respondents and tried to find out the major causes behind this emerging dilemma as well as I have succeeded in penning down some suggestions to curb the same. Like-

 Parents are required to deal their teenager children tactfully keeping their wishes in mind.
 Besides studies, teenagers should be engaged in other curricular activities of their choice which may be helpful in their personality development
 At Government level, broadcasting of serials related with crime and other social evils should be banned.
 There must be a psychologist in every school to observe the children who behave abnormally.
 Government should impose heavy penalty as well as severe punishment to those who are involved in the sexual crimes of girls
 Special training is required for the teachers to deal with the teenagers lacking self confidence.

Dr. SabaYunus has chaired a session and presented her research papers at International Conferences in Istanbul, Turkey and in Kuala Lumpur, Malaysia in 2014. Her research papers on various social issues have been published in numerous National and International Journals. She has participated in the Abstract Reviewing System of International Academic Forum, ACSSC. She is appointed as an Evaluator in CSJM University Regular Examination Since 2011.
She has delivered a Lecture at Reserve Bank of India, Kanpur and was Invited by Halim Muslim English School to Judge the Debate Competition in which 20 CBSE Board Schools of Kanpur have participated.
She received “Writer of Nation” Award by Editors and Journalist Guild and was Felicitated by Rotary Club on Teachers’ Day. In 2012 she has been felicitated by Chief Minister Akhilesh Yadav and in 2013 by Socialite Shabana Azmi for her excellence in creating Social Awareness.

Be the first one to write a review for the book Increasing Suicidal Tendency among Youth : A Sociological Perspective.