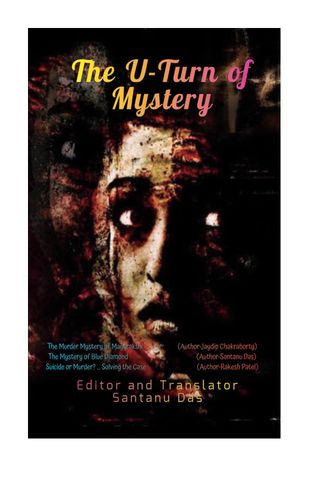 The U-turn of Mystery (eBook)

The book “The U-Turn of Mystery” consists of three suspense thriller mysterious detective stories. Magnificent cinematographic touch, fantabulous adventurous step by step suspense furnishing, perfect catastrophe at the end in simple language are the extra flavor of this book. Pratilipi website, various FB literary groups and those eminent writers of this book deserve special thanks. Don’t judge a book by its cover. Just buy it, open it with a big smile and you will not be disappointed because the book is an anthology of miscellaneous nonfiction stories of detective genre. The unique stories will be definitely appreciable to the reader. The book is so carefully designed with pictures that it will be more prominent when you’ll read those thrilling stories.

Jaydip Chakraborty
Engineer (Diploma in Electrical Engineering)
Creative Writer in Pratilipi , Rashi Rashi Rosikota and etc.
He has done a six-month workshop on screenplay writing from Academy of Film & Television.
Bengali short drama written by him was broadcasted on Akashbani Kolkata on 10th December , 2017.
He also writes short film and web series for Youtube Channel.
‘Aubekshan’ Theatre group has selected one of his full length drama for their production.
His comedy book named ‘Rashi Rashi Rosikota’ was published in Kolkata Book Fair 2018.
Residence – Belgharia, Kolkata
jaydip2007@gmail.com

Dr. Rakesh Patel
Orthopaedic Surgeon (MBBS, D.Ortho, FCPS Ortho)
Creative Writer in Pratilipi and various literary groups.
He would like to dedicate this book to his parents without whom he couldn’t have reach where he is. He would also like to thank his wife who constantly supported him during his work & motivated him to complete the thrilling story. He wants to thank smashwords team who gave a chance to him. Smashwords is the true guiders for a new writer like him.
Residence – Gujarat, India.
rekspatels@gmail.com

The U-turn of Mystery

Be the first one to write a review for the book The U-turn of Mystery.

From Dior to Dharma
Shruti Bakshi