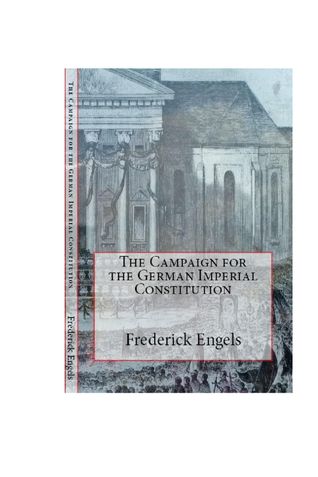 The Campaign for the German Imperial Constitution (eBook)

This refrain [Hecker, Struve, Blenker, Zitz and Blum, slay the German princes!– Ed.] which on every highway and in every tavern from the Palatinate to the Swiss frontier rang out on the lips of the South German “people's militia” to the well-known tune of “Surrounded by the Sea”, a mixture of chorale and barrel-organ–this refrain sums up the whole character of the “magnificent uprising for the Imperial Constitution”. Here you have in two lines their great men, their ultimate aims, their admirable staunchness, their noble hatred for the “tyrants” and at the same time their entire insight into the social and political situation.

The soul of the whole movement was the class of the petty bourgeoisie, usually known as the burghers, and it is precisely in Germany, and especially in South Germany, that this class is in preponderance. It was the petty bourgeoisie which, in the “March Clubs”, the democratic constitutional clubs, the patriotic clubs, the multitude of so-called democratic press, swore to the Imperial Constitution its Grutli oaths, as widespread as they were innocuous, and carried on its fight against the “refractory” princes of which the only immediate result was admittedly the elevating consciousness of having fulfilled one's civic duty. It was the petty bourgeoisie, represented by the resolute and so-called extreme Left of the Frankfurt Assembly, i.e. in particular by the Stuttgart Parliament and the “Imperial Regency”, which furnished the entire movement with its official leadership; lastly, the petty bourgeoisie was dominant in the local committees of the provincial diets, committees of public safety, provisional governments and constituent assemblies which in Saxony, on the Rhine and in South Germany won greater or lesser credit in the cause of the Imperial Constitution.

The Campaign for the German Imperial Constitution

Be the first one to write a review for the book The Campaign for the German Imperial Constitution.

Is Idol Worship Wrong in Hinduism by Swami ...
Swami Vivekananda