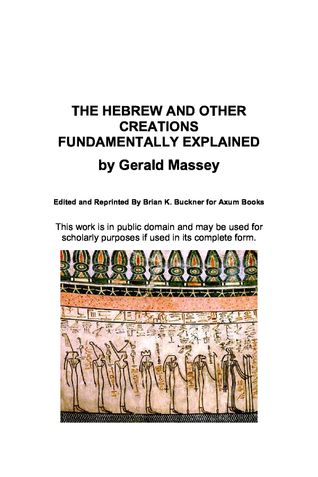 THE HEBREW AND OTHER CREATIONS FUNDAMENTALLY EXPLAINED (eBook)

The Hebrew and other Creations - fundamentally explained is one of Gerald Massey's greatest works.

Gerald Massey (29 May 1828 – 29 October 1907) was an English poet and self-educated Egyptologist. He was born near Tring, Hertfordshire in England.

Massey's first public appearance as a writer was in connection with a journal called the Spirit of Freedom, of which he became editor, and he was only twenty-two when he published his first volume of poems, Voices of Freedom and Lyrics of Love (1850). These he followed in rapid succession with The Ballad of Babe Christabel (1854), War Waits (1855), Havelock's March (1860), and A Tale of Eternity (1869).
In 1889, Massey collected the best of the contents of these volumes, with additions, into a two-volume edition of his poems called My Lyrical Life. He also published works dealing with Spiritualism, the study of Shakespeare's sonnets (1872 and 1890), and theological speculation. It is generally understood that he was the original of George Eliot's Felix Holt.[1]
Massey's poetry has a certain rough and vigorous element of sincerity and strength which easily accounts for its popularity at the time of its production. He treated the theme of Sir Richard Grenville before Tennyson thought of using it, with much force and vitality. Indeed, Tennyson's own praise of Massey's work is still its best eulogy, for the Laureate found in him a poet of fine lyrical impulse, and of a rich half-Oriental imagination. The inspiration of his poetry is a combination of his vast knowledge based on travels, research and experiences; he was a patriotic humanist to the core. His poem "The Merry, Merry May" was set to music in a popular song by composer Christabel Baxendale.
In regard to Egyptology, Massey first published The Book of the Beginnings, followed by The Natural Genesis. His most prolific work is Ancient Egypt: The Light of the World, published shortly before his death.[1] His work, which draws comparisons between the Judeo-Christian religion and the Egyptian religion, is not considered significant in the field of modern Egyptology and is not mentioned in the Oxford Encyclopedia of Ancient Egypt or similar reference works of modern Egyptology.

THE HEBREW AND OTHER CREATIONS FUNDAMENTALLY EXPLAINED

Be the first one to write a review for the book THE HEBREW AND OTHER CREATIONS FUNDAMENTALLY EXPLAINED.