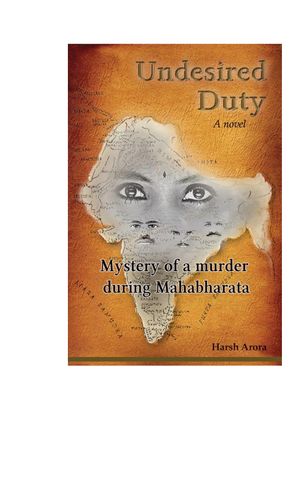 How would you like to wander around ancient India during the Mahabharata war, witness its unique customs, experience the rigid social structures, and glimpse the remote tribes while helping a young widow? Journey with Siya and experience her many trials as she tries to unravel the mystery of a strange symbol that she hopes will lead to finding her husband’s killer.

Unlike other retelling of mythical stories, the novel Undesired Duty is about how the lives of commoners were affected by the decisions made by the gods, kings and heroes of Mahabharata. The unfolding story is about the people who lived simple lives that caused them to struggle between the duties imposed on them and the desires they longed to fulfill.

Siya is an ordinary woman who lives in a village near Dwarka. Her interests focus on music and drama. A few months before the Mahabharata war is to start, Siya is planning Leela, a festival to honor the deity Indra, when she learns of her husband’s unexpected death. Her life then becomes anything but ordinary.

Siya and her family first become involved in what is to be a war unlike any other when two cousins, Arjun and Duryodhan, visit Dwarka to seek help from Krishna, their divine hero. The story follows the events of the Mahabharata war and its aftermath from the perspective of Siya and her family and ends with the ultimate destruction and rejuvenation of the Yadav clan, the clan to which the Hindu deity, Krishna, belonged.

Among other things, the story explores the development of symbols, culture and philosophy in early India that influence people of Indian origin today.

Swastika, one of the most sacred symbols of India was desecrated when Nazis adopted its modified version. Jews have a reason to call Swastika evil. But Hindus are unable to explain its sacredness. All they can say is—it is sacred because it has been sacred for centuries. Undesired Duty tries to explain how and why the lines and dots of Swastika developed into a sacred symbol.

In Undesired Duty, you'll step into another world, one that explores the turmoils and challenges of ancient India in a manner that makes those times seem as fresh as if they'd happened yesterday.

Here are a few issues, the novel Undesired Duty, explores from the perspective of commoners who witnessed the Mahabharata war:
- Why Krishna served as a charioteer for Arjun while giving his army to the Kauravs?
- Why Krishna wanted Arjun to fight even though he himself was called a deserter after he had fled the battlefield against Jarasandh?
- Though full of remorse after the Mahabharata war, why did Pandavs wage several battles after the war? In one battle Arjun almost died. Did he learn anything from the Geeta?
- Why Yuyutsu, the only Kaurav brothers to have survived the war, was the real winner of Mahabharata?
- Why Mahatma Gandhi, the messenger of peace was born not far from Krishna’s hometown Dwarka?

Harsh Arora was born and raised in India. He studied at IIT Delhi and University of California at Berkeley. Harsh has written and staged several plays based on Indian mythology. This is his first novel. He has two sons and lives with his wife in Beaverton, Oregon.

Be the first one to write a review for the book Undesired Duty.