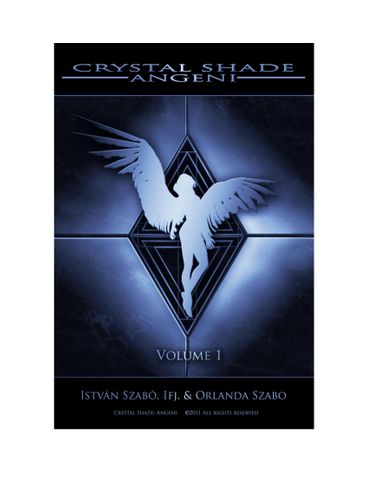 <cite><strong>There are three types of angel stories in the world; the religious, the mainstream, the Crystal Shade. Discover Crystal Shade, the world's only Auralight Fantasy*.</strong></cite>

<strong>"Thousands of stars could tell thousands of stories."</strong>
Seven year old Grace always dreamt of becoming a guardian angel; like those who guarded and guided her people and prepared to bravely fight in a dreaded mythical event, the Crystal Shade - which never came. It's not like Grace ever wanted to see Demons. Or wants to know what evil and darkness is - things that no one ever faced on her world and as the legends says, the Crystal Shade carries within -, nor does she want to die to be reborn as a guardian. But she thinks the mysterious life of angels is so noble, a fable that it sounds exciting - until it actually happens.

Crystal Shade: Angeni, Volume 1 explores the early life of a young daydreaming soul who is destined to reveal the forgotten past of her home world and to seek the answer to the eternal question; what the legendary Crystal Shade really is.

<strong>*Auralight Fantasy (a.k.a. AuraFantasy or Auralight)</strong> is a new variation and mix of many genres. While it contains many Epic Fantasy, Young Adult, and close-to-Science-Fiction, close-to-Steampunk mechanical and / or fantastical elements, such as aura-powered flying and other machines and weapons, or a strange world with a blue sun, it also includes biological-fantastical elements, such as aura beings with superpowers, living in different spirit realms of an otherworldly ancient society with an atmosphere not just felt, but seen as emanating from person, places and other living and non-living things. The term "Auralight Fantasy" was coined to reflect the more overtly fantastical tones of Crystal Shade.

Based out of Budapest, Hungary, Istvan began his writing and art career at a young age. His strengths include Science Fiction, Fantasy, Thrillers, as well as Spiritual, Romantic, and Political works. At the beginning of his career, two companies entrusted Istvan to create and write the stories of two of their video games. Since 2007, working parallel on several different projects, Istvan mostly developed and worked on the Crystal Shade franchise and wrote Crystal Shade: Angeni. As an artist for hire, he has created illustrations, character art, short CGI animations and marketing materials for various projects as well as for his own works, Crystal Shade: Angeni, 7 Post Meridiem, Nightfall and other unannounced projects. In 2007, Istvan produced his first short movie "15 Minutes of Fame", in which Istvan was the screenwriter, director and storyboard artist. "15 Minutes of Fame" won 3rd Place at the UPC-AXN Film Festival 2007.

Be the first one to write a review for the book Crystal Shade: Angeni, Volume 1.